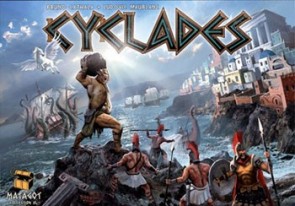 Game Name
Cyclades
Publisher
Matagot
Designer
There Will Be Games

As Matt Drake's article from a couple of weeks ago already told y'all, CYCLADES is pretty good. More than that, I'd go so far as to call it the best game I've played this year to date. It's an easy to play, fun game that really does a lot more than you'd expect it would given its brief rules and abstractions. Hell, there's even tribute-paying auctions in the game and they're still thematic and fun. I love that it's a very slender design, not packed full of rules blubber and extraneous components...it's tight, focused, and gets right down to business but there's a lot to do. It's very "complete", and think it's brilliant design that so much gets packed into so little without much loss.

But yeah, CYCLADES. You should play it. Maybe even buy it. Like Asmodee's last game, CLAUSTROPHOBIA, I think you'll be surprised at what all you get for sixty bucks. The monster figures are awesome, and the Kraken has my vote for miniature of the year.