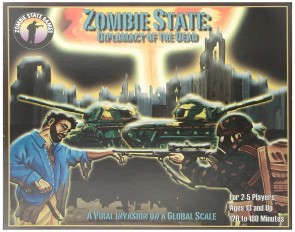 It feels like a hybrid 80s Ameritrash/Avalon Hill game from the eighties (Gammarauder?) with a eurogame injection. I'd say it's a little like Pandemic, in that outbreaks ramp up as you play. There have been complaints that various technologies are overpowered, but interestingly the complainers all mention different technologies. I don't think anyone has discovered a perfect technology research path--the randomness of the outbreaks tends to unravel perfect strategies. For example, you can wall off borders, but then random zombies can pop up behind the wall.

Very, very thematic, tense, and fun. When you're done, you feel wrung out and a little gross for funneling all those zombies into your opponents' countries and sacrificing your own, healthy people in order to preserve a small group of survivors. The owner of the copy we played said that Europe has won every time he's played, but I managed to barricade South Africa and survive with a full population while sending outbreaks into South America (Zombie water skiers?)

I thought the components were fine, and the tanks and border pieces were as good as anything.   It would be cool to bring in Zombie minis, but I'm not sure how you would indicate when they were sated on human flesh, which is easily accomplished with flippable counters. Our FLGS has it for $35, and I'm tempted even though it will only hit the table about two glorious times a year.

I loved how zombie hordes are drawn into highly populated regions, and the gut-wrenching decisions about who to sacrifice in order to survive.

We played with four, and three of us had read (or in my case, read and skimmed) World War Z, while my son (13) had read The Zombie Survival Guide. It took us three hours after the rules explanation, but that was with 3/4 new players, one of whom had only played Axis and Allies once, and my son, who has mostly played Heroscape.

We actually ran out of border pieces at one point, which was interesting. Overall this game felt pretty  Ameritrash, and much more to my thematic and experiential liking than Pandemic.  I would sort of like to see Z-man or someone pick this up and fine tune it just a wee bit, but regardless I keep thinking about it and want to play again.  Even more importantly, the teen son wants to play it again so he can earn the nuclear bomb and wreak some havoc.