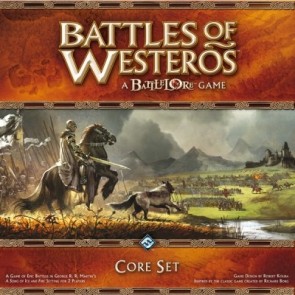 As many of you folks may remember, back when BATTLES OF WESTEROS was announced a lot of folks, myself included, weren’t exactly impressed with the “mystery box” and I even dubbed it an epic fail. I went so far as to state that I didn’t even want a review copy of it.

My reasoning was that the game was announced, basically, as A GAME OF THRONES BATTLELORE, which doesn’t exactly excite me at all given my distaste for both components of that equation. None other than Christian Petersen himself flamed me here on the F:AT boards for my comment, and for my part I did kind of feel that I jumped the gun on dismissing it out of hand. I actually challenged Mr. Petersen to change my mind about it, and I decided that I would review it for fairness’ sake

At Mr. Petersen’s personal behest, I have been sent an early copy of the game. In fact, I’m the only person outside of the FFG organization that has one right now. I can’t post a Gameshark review just yet- they want you to be able to look at the rules before you read my thoughts on it- but I’ve been cleared to do a little preview/first impressions piece on it here.

As expected, it’s a BATTLELORE-sized box complete with the BATTLELORE brand that almost makes me break out in a rash emblazoned on the front. Component mix is about what you’d expect- double-sided board, terrain pieces, lots of FFG-type counters, rulebook/scenario book, and so on. I’m not impressed with the plastic at all. They’re billed as “highly detailed” and they are, but they’re also thin, small, and cheap-feeling. They’re separate from the bases, which was a cost-saving measure. There’s a little piece of paper in the box that says you might have to glue them to the bases, but I’m going to go ahead and say that you’d better just plan on gluing them because they barely remain standing. The plastic is soft and doesn’t really clip into the bases well at all. If you’ve seen the figures in RUNEWARS and HORUS HERESY, they’re similar in quality to those figures- not the ones in DESCENT or STARCRAFT. By and large, I think it’s comparable to the BATTLELORE package, even without some of the bells and whistles like the plastic trays, lore buckets, and all of that junk.

As for the gameplay, I’m pretty impressed and willing to eat some crow on it. I’ve played three games, the first scenario twice and the second one once. It’s still early, and I’m still collecting my thoughts on it, but I may actually like it better than C&C: ANCIENTS- it just seems tighter and better-defined although I still think that game used the system to describe Hoplite-era combat extremely well. The new game adds a lot of detail and narrative without unnecessary rules bloat- there are now rules for engagement, flanking, a better depiction of command structure, and a more interesting implementation of special abilities. There are a couple of special tokens and scenario-specific items and events that seem like they’ll give the battles more of a story.

But here’s the kicker- it doesn’t’ really feel like BATTLELORE or really even a C&C game at all. The cardplay command mechanic keyed to the three-sector board is gone. Right out. Does not exist in that form. Instead, you roll D8s before each round to generate command tokens corresponding to unit ranks (red, green, and blue) and you also have a small hand of Leadership cards. Leaders are special, named units with a couple of abilties and a two-hex zone of control. They have a command limit, so they can only issue so many commands to controlled units a turn and some cards are specific to certain leaders. So there’s a lot more flexibility, but there are still the limitations and boundaries of command that have characterized past games in this system.

Combat is the closest element to past C&C games- roll a die, match to flags. It’s D8s this time, the same dice used to generate order tokens. There are a couple of keywords that are new to the game, but by and large martial matters are the least changed apart from the engagement and flanking rules, which do add some neat twists to the formula.

So far, I’m enjoying the game a lot more than I thought I would because I think Rob Kouba has really kind of innovated the C&C system and made it both more refined and more complete. It still feels a little gamey for medieval warfare, but I think it captures a warband style of conflict pretty well. I’m also happy to see a morale mechanic that keys to certain leadership card benefits and scenario effects, including potential routs. There is also a skirmish system (basically CALL TO ARMS) included so you can do ad hoc scenarios.

I am concerned about the expansion strategy- if it turns into an expansion-a-month thing and requires frequent purchases to keep up, I’m going to be less partial to it. I don’t like that we’ve got a House Lannister expansion on the books and the game isn’t even out the door yet- I really think if they were going to do that, they needed a House Stark expansion too. I’m sure that’s on the way, but a simultaneous release would have been a little more honest- or just putting them into one box. That being said, there’s only point in the rulebook that’s a come-on to buy more, and that’s to do with the skirmish system and the promise of more available later. It is complete out of the box, and it feels much more complete than BATTLELORE did. There’s not a great variety of units, but the different leaders and their abilities add a lot of variance to the battles.

The final product is good and I think it's worth a look if you were hoping for a "better" version of BATTLELORE or you want a medieval war game at this scale.. I’m interested to see how some of the more complex scenarios play out and how it’s going to work with some of the different commanders in play. But for a middle-weight, tactical medieval wargame, I think it’s going to be a hit for a lot of folks. Definitely better than BATTLE CRY, MEMOIR ’44, and BATTLELORE and a question mark as to if it’s better than C&C: ANCIENTS. Expect a review in the next couple of weeks.