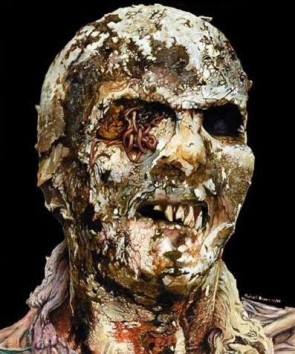 Pictured is the best zombie you will ever see in a movie, or in any other media for that matter. Note that it is not cute, funny, and it is not wearing a chef hat or other article to signify to the viewer what he was before the zombie apocalpyse. No. It is a maggot-eyed, decayed, rotten, and grim visage that represents everything the living dead should. But I digress.

This week I've got John Werner's ZOMBIE STATE on the slab, and although I absolutely love that it is a DIY production, it has an original gameplay concept, and it's at a reasonable price point, I also don't think it's really all that great. The success and good will that this game will enjoy is strictly because of its scope and subject matter, not its design quality.  I think Mr. Werner's ambition sort of went a little further than his design ability because it simply doesn't work quite right in some places and is a little sloppy in others. I like the effort, and I'd much rather see a game like this stumble than one that plays it safe with tried and true mechanics and play concepts. But it's much too easy to wind up out of the game early on, and it's one of those things where you're still playing for two hours after you've crossed the threshold of certain doom.

But worse, I think the game is a thematic failure. There is no "Diplomacy of the Dead", and reports that it is mostly a mulitplayer solitaire game are true. This is unfortunate, because what the game _really_ needed was an impetus for nations to work together much more so than to compete. It should have been co-op, or at least co-op with some friction. If we take it that WORLD WAR Z is its primary inspiration, one of the key themes there was that the nations of the world wind up having to work together or face annihilation. In this game, you simply watch what other countries are doing, sometimes getting a reseach bonus from them if they have a tech you want, and maybe even nuking them.

Finally, can somebody tell me what the deal is with the "raised/razed borders" thing? That makes no sense!