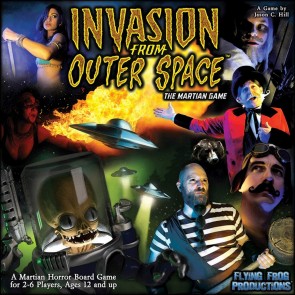 Normally I dislike reviews that indulge in comparisons to other games. But given Invasion from Outer Space is styled as using the same game engine as Last Night on Earth I can reasonably justify doing that here. It's not so useful to readers who are not familiar with Last Night on Earth, but hopefully they're in the minority here. Expect this to be a quick and succinct bullet point type commentary on what struck me as I punched, sleeved, and read the rules, rather than a polished review. Hopefully I'll get to play Invasion from Outer Space on Monday evening.

Style and component quality and quantity is on a par with Last Night on Earth (so expect the same love it / hate it comments about the CD). When putting the cards into sleeves I had the impression that they have less variety, i.e. there are more duplicates. You also get counters that have no use as yet, just like with Last Night on Earth. Other similarities are to be expected: you still have Lights Out; Spawning Pit tokens are now called Landing Site / Flying Saucer tokens and can be moved. Some scenarios use the Hero Starting Cards (x) rule from the Dot System introduced in Growing Hunger. Buildings can be destroyed.

The Hero side of the game is largely unchanged, though some of the rule explanations are rewritten to be clearer.

Three Last Night on Earth scenarios have their counterparts:-

Taken Over has been replaced with Cone of Light, instead of placing figures you turn over the top Hero Card each turn.

Kerosene works as per Gasoline, except it can be placed multiple times during your move. You roll each time and a 1-2 means it has run out.

In addition to Last Night on Earths Hero Abilities, IFOS also has Hero Talents. These are more powerful and cost a Power Token to use.

When a Hero is killed the player gets a replacement right away; this happens with all Hero Deaths, not just the players last one.

Fights, a Tie is now just that, a draw, nothing happens.

Winning, the Heroes also immediately win if there are no Martians on the board.

Power Tokens, Heroes start with one. In the Move / Search Phase they also roll a green D6 and on a 5-6 they gain a Power Token. They can have a maximum of three.

Agility, a new Hero stat equal to the number of Health boxes they have, roll equal to or higher than it to Dodge.

Pinch Points are buildings that meet at corners, Heroes must pass an Agility test to pass through.

Hard Walls function as per normal walls but in addition they cannot be seen through, the LOS through a door is a straight line one square wide.

Cannons, costs a Power Token and needs the appropriate Hero card, Range 3, roll D6 for every Martian, kills on a 3-6. Blow 'em Out of the Sky! ignores Range and uses an Agility test.

Destroyed Flying Saucers can either crash in the square below (1-2) or in a Random Building (3-6). Every figure takes a Wound on a 3-6 then gets moved to an adjacent space. If it crashes on the square, a Fire also starts there and if on a Building, the entire Building is destroyed (figures must be moved outside it and can move two spaces if necessary).

Fires, any Fire Item can start one during the Ranged Attack Phase, on a 4-6 it does 1 Wound. They're so good they get their own Fire Phase! Roll D6: 1 goes out, 2-4 no effect, 5-6 it spreads. Each Fire token has four directional markers, one Hero's choice, and one Martian's choice, roll D6 and add a new Fire token on that space. And if every space in a Building has a Fire, destroy it!

Crowds, not as much fun as Fires but they get their own Phase as well. Only used in some scenarios, they have four Health boxes. Crowd movement is the same as for Fire (ignore walls) except a roll of 1 heals one Wound. Crowds are defenceless and so do not fight back, Martians hit Crowds on a 6 and when destroying them get a bonus 2 Command Points the following turn. Heroes in the same space can choose to Protect the Crowd or Hide in the Crowd, forcing the Martians to attack the Hero or the Crowd respectively.

Unleashed - kill the Super Zard Beast, has extra Health and can only be Wounded once its Weakness has been discovered (either Fire, Water, or Cabbage).

What about the Martians?

Well, for starters, there are no War Machines. They'd better be in an expansion soon or there'll be trouble. They do have a Death Ray card, however, which has a beam template allowing it to wreak havoc on several spaces (and the Heroes cannot Dodge).

The Martian Turn has the same sequence as the Zombie Turn, but with one addition, the Command Phase:-

3) Roll for Reinforcements - roll 2D6, equal to or greater than the number of Packs to get reinforcements. The stacking limit is a full Pack of 3 Martians.

5) Move Martians - as a Pack, 1 space, cannot move through walls, if a Hero is in the same space must stay and Attack / Fight.

7) Fight Heroes - the Pack fights each Hero, unlike Last Night on Earth there is no pairing off.

The Martian Card deck is composed of two types, Event Cards which you know from Last Night on Earth, and Tech Cards, which have a Command Point cost and remain in play.

In the Command Phase you use the Martian Command Console to select how your Command Points will be spent. The options are: Draw 1 Martian Card (cost 1), Move a Saucer up to 2 Spaces (cost 1), Immediate Reinforcements - 3 Martians (cost 2), Build Martian Tech (cost 1), and Call Martian Champion (cost 1). You may choose an option more than once. Drawing a Card cannot take you above 6 cards. To Build Tech you take a card from your hand and place it face down on the table and put the Command Point token(s) on top of it. Once it has as least as many tokens as its cost it may be revealed during a Command Phase and turned face up. Tech Cards on the table do not count as part of a players hand. To Call a Champion you place the Command Points on its round token.

There are two Champions, the Zard Beast and the Martian Leader. The tokens record their Health and Special Abilities, just like a Hero Character Sheet. It also has the cost to Call them, their Move, and number of Fight Dice. The Zard Beast has the Special Abilities of Roar (Hero loses 1 Power token), Toughness (ignore a Wound on a 4-6), Giant (move through walls and win on a tie), and Rage (AKA Zombie Hunger). The Martian Leader has Laser Pistol (he and any Martians in his space hit on 3-6) and Leadership (may be in the same space as a Pack, Pack may move with him instead of their normal move (he moves 2 spaces)).

In a Fight the Martians may play any number of Fight Cards, unlike Zombies which can only play one. If a Hero is killed the Martians get a bonus 2 Command Points the following Command Phase.

The rule book ends with four and a half pages devoted to combining IFOS and Last Night on Earth. Maybe I'll post about that another time.

Over at TOS I see the moronic rules questions have started. Does no one actually think about what they read over there any more... I trust you F:ATties can do better.