Mansions of Madness - A First Impression 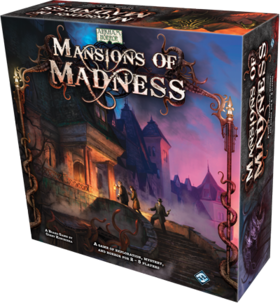 I adore it. If you are looking for an 'objective review' that describes Mansions of Madness' mechanics, gameplay, and the depth of its in game decisions, look elsewhere. This is't a review; it's a totally subjective rave.

What Castle Ravenloft does for D&D, Mansions of Madness does for Call of Cthulhu. When we used to play Call of Cthulhu, it was never a monster bash. It was about the mystery, and the story. As the GM it required a lot of work on my part. In addition to the prep work, I had to really think on my feet. The people I played with were creative and uninhibited. I'd have a nice, simple scenario were the investigators are supposed to go to a house and find clues which will eventually lead them to a secret passage in the basement, and 30 minutes into the game they are jumping out the second story window, stealing a car and driving like maniacs down a dirt road.

So, of course, three turns into Mansions of Madness, the Man is in a room with an exterior door, and he asks me if he can move out of the house. I told him that he could but it would mean that I'd have to pull out the truck and the road tile from Last Night on Earth and the board from Arkham Horror.

Mansions of Madness makes investigator players who are inclined towards RPGs think like role players, and makes the Keeper think like a GM. The investigators don't know what their objective is.  They need to explore and poke around to discover exactly what is going on. In doing so the mystery/story is revealed. The story of the game isn't the actions of the investigators. It's not about player 1 moved into the kitchen and found a suitcase, fought a cultist, and then ran down the hall. The story is the mystery that is revealed through the clues and the actions of the minions.

This is where I could see the game falling apart. Although the scenarios do the prep work for the Keeper, it is really up to this player to weave the modular story elements - flavor text, clues, the appearance of minions and monsters, into a coherent story. These things contain elements of many of Lovecraft's stories. Being familiar with these stories, it was pretty easy for me to read the introduction and clues, check out the items as I placed them and recognize their source. Narrating the story as the game progressed was fairly easy for me. I didn't spawn a random maniac on to the board, but rather a specific character from the story, so deranged and disheveled that he was at first unrecognized by the investigators, burst through the bedroom door. But if you have a Keeper who isn't into playing the role of story teller, who isn't familiar with Lovecraft, who plays Mansions of Madness as if it were Decent, the game probably won't hold together well. You are going to get something like: some random maniac with an axe (because the mini has an axe, so of course you can't overlook that detail) spawns in the room and attacks.

The investigators also need to play in the spirit of the game. Fortunately Mansions of Madness rewards then for doing so, and punishes them if they don't. The most 'efficient' path to investigator victory is to determine what their objective is as quickly as possible, and the best way is to do that is to follow the clues. The first clue points to the location of the second clue, which points to the location of the third. As soon as the third clue discovered, the objective is revealed. Knowing the objective makes it much easier for the investigators to thwart the Keeper. Finding the clues in order also gives the Keeper the opportunity to tell the story in the most coherent manner.

After a certain number of turns, if the investigators haven't found the third clue, the objective is simply revealed, and the players then have about three turns to achieve their objective. It is possible to win this way, but not easily.

Of course, in addition to finding the clues,  there is combat with madmen and monsters, but this is super simplified and not the primary focus of Mansions of Madness. There are no hexes, and no grids. No optimal positioning. Just if a scary thing lumbers into the room that you are in, it just might drive you a little insane. If it is on the same space that you are on, it might attack you. If you have a gun, you might be able to get a shot off at it before it moves in on you, but you might be too rattled by the horror of it all and fumble your gun. So just attacking anything that wanders by, may not be your best course of action. Especially since that deranged dude, dragging the axe, might just be the guy you're looking for.

Mansions of Madness is essentially a light RPG without the fuss and bother of an RPG. Plays in a couple of hours. Minimal prep time. No weekly commitment required.