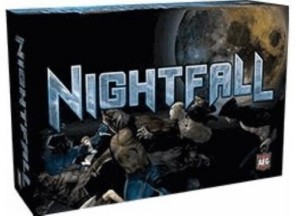 This is not meant to be a review by any means, just a brief roundup of my feelings on the game so far.

My copy of Nightfall arrived today, and, lucky for me, it was game night.  We ended up playing it twice, once with 3 players and again with 5.

Now up until this point, Puzzle Strike has been my deckbuilding game of choice.  I think the deckbuilding mechanic itself is clever, but I found Dominion to be solvable to an extent that expansions can't really fix it without drastically altering the game.  Then you have Puzzle Strike, which essentially is that altered version of Dominion.  I've come to find that by ignoring all the action chips and just buying purple chips and some higher money gems, you can usually win.  Just spam those purples and you'll do alright.

Which brings me to Nightfall.  The word on the street was that the game really didn't feel like any of the other deckbuilers out there, and I'm pleased to say that those rumors are true.  If you haven't really been a fan of deckbuilding games up to this point, Nightfall is still worth a look.  It's more akin to playing Magic rather than the process of getting ready to play Magic.  There's real combat here, and not just the abstract kind you find is Puzzle Strike.

The problem of spamming cards is gone thanks to the chaining system.  You can keep buying that same card, but you're not going to make much use out of it if you can't chain in or out of it.  There's an incentive for variety.  And speaking of the chain system, I _LOVE_ that it keeps everyone involved even when it's not their turn.  A common complaint lodged at other deckbuilding games is that you just sit there watching people go through their actions, and if those people like to really ponder over what cards they buy, it could be a long wait for your turn.  It might still be a bit of a wait to get to your turn, but you still have the chance to play cards on every turn getting to yours, plus there's defending in combat.

One of the mechanics that I really liked from Puzzle Strike was that you would draw more if you were close to losing, and Nightfall has a similar one.  After you draw, you get to execute a "Wound Effect."  Though there are different types of wounds in the base set, they all do the same thing as of now, and that is that you can discard wounds from your hand and get to draw 2 cards for each wound discarded.  If you discard 3 or 4 wounds this way, you're going to be able to pull of some nasty plays.

The game isn't without some issues.  The cards feel a bit same-y.  They really aren't, but they certainly look that way on the surface (and I don't mean in art...which I like, btw).  There's lots of cards read "Deal X damage to target minion," or "Deal X damage to target player."  When you play deckbuilding game, you're looking at what everything does, so many of these cards are going to look similar.  But when you get down to it, there's subtle difference like how much health the minion has, how much damage it deals, and its Kicker effect.  Variety in effects would be nice though.

Other than that, the other problems would be that the theme really doesn't come through, it's an expansion pit (but we knew that going in), and that at least the 2 games I played, it runs a bit long, or at least longer than other games in the genre.  It might get shorter with experience, but who knows.

I'm really liking the game so far.  It seems that the strategy here is nothing like anything else in the genre, and it really is more along the lines of actually playing a CCG rather than the process of building a CCG deck (though that is still here).  I'm hoping to get more games in this weekend at ConCon.  I'll have a real review here on the Fort and on my blog, The Smilex Disease.  Speaking of the blog, I need some followers!  I'll be rolling out a contest pretty soon, and there may be an incentive to be a follower before I announce what it is.  More on that later, but I promise, it will be cool.