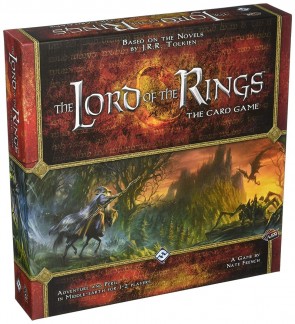 Game Name
Lord of the Rings: The Card Game
Publisher
Fantasy Flight Games
There Will Be Games

I've played the new Lord of the Rings living card game a couple times now.  My first impression is that it's very much like Space Hulk: Death Angel... You have a few location cards that you need to push through, while dealing with a line up of baddies who are coming at you relentlessly.  There's a similar feeling of trying to maximize the abilities you have in order to eke out the best chance you have of surviving.  The difference is that as opposed to having a fixed group of space marines in Space Hulk: Death Angel, in Lord of the Rings: The Card Game you have a small group of heroes and can bring in other allies, and add on weapons and enact events that will help you out.  In that sense, I'd say that Lord of the Rings: The Card Game (LOTR) has more depth and potentially more replayability, and there will definitely be more support in terms of upcoming expansions and scenarios, a few of which have already been announced.

Each turn, you have to commit characters (heroes and/or allies) to the current quest, which is how you progress through them, and those heroes are then exhausted and can't do anything else that turn.  And exhausted characters can't defend or attack.  And defending (which happens first) exhausts a character, so it's always an either/or thing; either you defend or attack this turn.  I like that each character has one focus each turn, either questing, defending or attacking (though some characters like Aragorn have a special ability that allows them to possibly refresh during the turn).  And working out whether a hero or ally is best served to do one or the other of those options is a big part of the decision-making process in the game, and it is an important and meaty decision each turn.  But all of the exhausting of characters can be, well, exhausting.  It's a bit like working out the facing decisions in SH:DA, and trying to optimize it all is kind of a brain-burner.  There are also resource tokens that each hero (but not allies) get one of each turn and can accumulate, and how best to spend those on new cards is important to decide.  All told, it definitely takes the general type of card game challenge that Space Hulk: Death Angel provides and adds the depth of a CCG to it.

The thing is, I've become burned out on Space Hulk: Death Angel recently.  I love it for what it is, but I feel like I'm pretty much done with it.  I picked up the new Hero/Mission packs but haven't even bothered to try them out yet.  I'm just not feeling the juice in that game anymore.  And though LOTR:LCG seems to be a more involved and more interesting and more thematic and more expandable version of that type of thing, ultimately it does seem to be... more of that type of thing.  So I'm having a hard time getting that excited to play it.  I also have no real interest in the deck-building CCG aspect, so that may limit my long-term appreciation of this.

But that being said, I'll muddle through a few more solo plays and actually try to beat the darn thing.  I haven't done so yet in two solo games, even against the easiest scenario.  I like that it's very challenging like that.  It's possible that I'll want to pull this out now and then after all, and maybe some of the expansion packs will offer some interesting twists.  I guess my initial recommendation would be that if you really like Space Hulk: Death Angel and are not burned out on it, and you like the LOTR theme and like the CCG/LCG aspect, then you need to get this ASAP.  But for me, I still feel like the Knizia co-op LOTR game is of more interest for solo/co-op play, even with its abstracted simplicity, and War of the Ring and Middle Earth Quest are more of the type of immersive LOTR experience that I'm looking for.