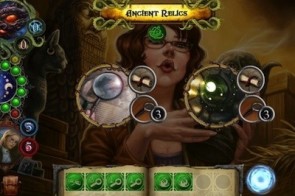 If you haven't seen it already, Elder Sign: Omens is out now, for iOS.  Here's the iTunes link: http://itunes.apple.com/app/elder-sign-omens/id475404533?mt=8   Apparently the Android version was released, then pulled, so I guess you'll have to wait for that, but it should be out soon for Android, as well as specific versions for iPad and Mac.

This app is fantastic in terms of graphics and execution.  Seriously, I don't know if there's a better board game app in that sense.  And the gameplay is very well done and easy to work with, even on the small iPhone/iPod Touch screen.  It was a little buggy at first... I had to restart about 10 times in my first game, but strangely it's as though my device "got used to it" or something, as it's been pretty stable since then.

There are quite a few changes, mostly small ones, between this version and the dice game.  The difficulty does seem to be increased, as I've lost 2 out of the first 5 games I've played (compared to 2 losses out of about 25 plays of the dice game).  One thing that I'm not crazy about, though, which relates to the difficulty increase, is that you can now get hit with 3 doom tokens at once at midnight, which seems excessive and random.  Yes, I want the game to be a lot more difficult, absolutely, but I'd rather see a more steady stream of single doomies at midnight, or even two at a time (and that happens, too, in the app), as opposed to three at once.  As it is, because of screen loading time, the app can take quite a bit longer to play through than the dice game, and it can seem kind of lame to play all the way through it only to lose out of the blue because you got hit with 3 doom tokens at once.

Actually, the 3 doom tokens at once gives me an idea... I think it might make a good variant for the dice game (and the app) to have something akin to the Innsmouth Deep Ones Rising Track, where certain things add tokens to it from time to time, and you can move to certain adventures (or maybe back to the Entrance) and spend Clues to remove those tokens or to fill up a different track (like the Feds Raid Innsmouth track). But if you don't do that soon enough, then 3-4 doom tokens are added at once, or maybe you just lose altogether. To me, that would be a lot better than adding 3 doom tokens at once completely at random at midnight, because there's some sense of control and expectation you have over that happening.
But anyway, that's another story...

A lot of people were anticipating that when the app came out, they'd be able to deduce the correct rules for the dice game (which there has been a lot of confusion about) from the rules to the app.  But I think that's not going to be a good idea at all, because the app has numerous small changes, and many of them are just done with the intent of making the programming easier and/or adjusting the difficulty.  So I really don't think the two versions can be integrated smoothly, nor should they be expected to.
Examples of the some of the changes include:

Looking at that list, I'm thinking how it's annoying that after the confusion about how some things are supposed to work in the dice game, this coming out now probably makes it worse.  And now you essentially have to relearn the game, or at least relearn a lot of details of it, to know how to play this version effectively.  And then when you go back to play the dice game, you have to remember those differences.  Oy.

But the bottom line is, this is really a must have as far as board game apps go.  On its own, without factoring in any of the confusion between this and the dice game version, it's a really great game and it's just incredibly well put together in terms of the production and graphics.  The price of $3.99 for iPhone/iPod Touch is very reasonable (I was expecting $4.99 or $5.99).  Hopefully, they'll add some more of the GOOs in there, as well as some other tweaks and changes (no more 3 dooms at once, please, unless I know it's coming or have some means of dealing with it!).  But it is great already, as it is.