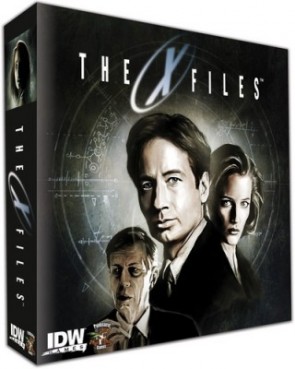 If you're a hobby gamer, you can break down mass market games.  Stick with me here, this isn't going in a "These Games of Ours" direction.

The vast majority of it is stuff a hobby gamer isn't going to give two craps about.  Maybe stuff you'd play with your kids, but anything "adult" would mean dumb party games and bad liscensed games to make a quick buck.  Then there are those rare games like Heroscape or Buffy the Vampire Slayer or Star Wars Epic Duels that are totally accesible for the mass market world but manage to strike a big chord in the hobby gaming world, often becoming coveted "grail games" in years to come.

With that in mind, X-Files (designed by Kevin Wilson, published by IDW) is a really strange beast.  This is a mass market game (and not the good kind) in hobby game clothing.  There's hardly anything here.  It's a one vs. all affair with the FBI agents from the show going up against the Smoking Man.  Agents move, but often they don't; they play a card; rinse and repeat.  The Smoking Man plays cards in secret to the board, hoping to make life difficult for the agents, but it never really does.  That's it.  There's a currency used by both the agents and Smoking Man to play cards, but it's essentially useless.  The agents only need to pay if they play a card outside of their skill set, but they often trade cards to ensure they always have something in their hands that matches their skills.  The Smoking Man's cards seem to always cost more than he can afford and even then, they're never that much of a penalty to the agents.  There's absolutely zero tension in the game.

I've never watched X-Files but I can comfortably say that there's next to no theme here in the gameplay.  The production has some nice touches like pulling cigarette butts when you're trying to search for clues, but this game very much prescribes to the idea that flavor text equals theme.  Not only are we over that, but holy hell is the dialogue from X-Files bad.

X-Files is a tremendous swing and a miss.  This is one of the most dry, lifeless games I've play in a very long time.  If this were your first game outside of a the pantheon of family classics and you were a huge X-Files fan, this game might be earth shattering, though I don't think that feeling would last for very long.  To Kevin Wilson's credit, it is the first solo design of his that I've played where the mechanics are not disparate pieces that don't jive together.  The mechanics work together here...they just fail to create anything exciting or interesting.