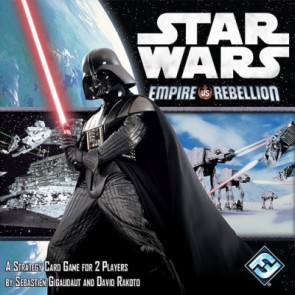 It goes without saying that most things are made better with Star Wars.  Holiday specials being a glaring exception, of course.

So while I have never played Cold War:  CIA vs. KGB, I can assume that I would like this Star Wars retheme more than the original, and the liscense lends itself well here.  This is one tight little game.  It's a bit of blackjack, a bit of war, and more tension than it has any right to have given that it's essentially a combination of the aforementioned.

You get a deck of battles from the original trilogy (photos from the movies, love that), each battle tells you how many cards you can play and gives you number to come closest to without going over.  Winning a battle gets you victory points.  On a turn one of three choices:  Flip a card from the top of your deck, activate a card in front of you for the effect, or you spend an Influence token to ready it so that it can be activated again.  On paper, this shouldn't be that good.  And at first, it's a bit weird.  Once you really get the hang of it and get to know the cards, this thing becomes the perfect balance between a duel of wits and pushing your luck.  Occasionally it feels like you've been backed into a corner, but it always feels fair.  It can get intense, sometimes loud, but it's always quick.  If I still went to meet friends at the local game shop, this is the game I would probably end up playing all night without meaning to.

Best of all, this game runs for $10 or so on Amazon it is super portable.

Now imagine a certain other game about the Cold War reworked to accomodate Star Wars...

Maybe they will re-theme WoW Adventure game. That would be cool. Although, I don't know how they would handle PvP. Although Luke and Leia beating on each other could be funny.

charlest replied the topic: #197075 07 Feb 2015 00:33
I totally wrote this off but Black Jack is a guilty pleasure of mine. Now I'm mildly interested. May throw this into an order sometime.

DeletedUser replied the topic: #197108 07 Feb 2015 14:58
This one is due to arrive any now. I already have CIA vs KGB and enjoy that, but I just can't resist the Star Wars theme and I think that it'll go over better with the kids.

DeletedUser replied the topic: #197233 09 Feb 2015 19:31
Wow, it comes in a shitty little box doesn't it? I sleeved the cards and now I can't fit everything in the box. Normally you can take the insert out to create some more space, but this one doesn't even come with an insert.