Time of Crisis: The Roman Empire in Turmoil - A Five Second Board Game Review 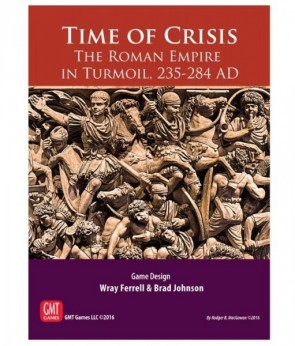 Game Name
Time of Crisis: The Roman Empire in Turmoil
Publisher
GMT Games
Designer
There Will Be Games

If you wish for peace, prepare for turmoil.

Time of Crisis: The Roman Empire in Turmoil is a unique take on the typical area control formula. It combines deck building with a governor appointment system, separating the concept of official control of a region from the military might present in that region.

This creates terrific thematic flair as you can use political sway to gain control of regions where your armies aren’t even present, but can have their support eroded by a massive opposing army camping out in the capital. This makes for a uniquely satisfying puzzle as needing to defend your holding both politically as well as militarily forces new considerations. I know of no other game with this dichotomy.

I found Time of Crisis to be a worthwhile experience. However, time between turns is pretty long, and, coupled with the original sin of the genre of effective player elimination, I can see some frustrating experiences emanating. These experiences may be hard to spot if you aren’t the person getting blown off the map.

There are no user reviews for this listing.
Already have an account? Log in now or Create an account
Discuss this article
Log in to comment
Posts in discussion: Time of Crisis: The Roman Empire in Turmoil - A Five Second Board Game Review

jpat replied the topic: #295364 12 Apr 2019 08:38
I've only experienced this solo, and only a partial game because I just get kind of mentally worn out using bots to play three others sides (also true for me for COIN), though I will say the bots (from the expansion; there aren't any in the base game, to be clear) are quite well done and have interesting "personalities." Anyway, I'm anxious to give this a try either with four or with up to four with a bot or two in the mix. I like deckbuilders and I like the ancients theme.

BaronDonut replied the topic: #295365 12 Apr 2019 08:44
I've had my eye on this one for a while. I haven't picked it up yet because 1) I have ten million deck builders already and 2) I have ten million historical games that never get played. It'll never work.

Sagrilarus replied the topic: #295377 12 Apr 2019 10:56
I think I'm very much going to enjoy this run of reviews, because I think it is going to introduce me a set of games that I simply haven't heard of other places. Time of Crisis is a good example, where the game clearly has several facets that appeal to me but had somehow completely escaped my notice.

For the last five years I've depended on tailored content (like Mason's brief, well-considered summary above) to bring items of interest to my attention. When his column was announced I was assuming we'd be seeing the usual fare, which is fine, but the first out of the gate is a GMT title with modern concepts. A nice surprise.

I think this site would do well to present "older" titles (i.e., 18 months or older) that have settled in. That would be a valuable service to a community that is spending most of its time focusing on unavailable material. Discover something interesting, buy it today, play it this weekend. That's a more satisfying approach to my gaming time.

ubarose replied the topic: #295382 12 Apr 2019 11:20
Thank's for the feedback Sag. I am very excited about this new feature. Mason's an omnivore gamer so we are looking forward to hearing about lots of different sorts of games.

I am also hoping it encourages other contributors to try their hand at this format. Next time someone discovers they have written a full paragraph or two about a game in the "What Game are you playing" thread, maybe they will consider submitting a 5-second review to the site instead.

ubarose wrote: I am also hoping it encourages other contributors to try their hand at this format. Next time someone discovers they have written a full paragraph or two about a game in the "What Game are you playing" thread, maybe they will consider submitting a 5-second review to the site instead.

ubarose wrote: I am also hoping it encourages other contributors to try their hand at this format.

MasonSokol replied the topic: #295405 12 Apr 2019 15:06
I definitely hope to skew towards either games I feel I have interesting things to say about or games I feel haven’t had enough said about them. Hopefully either way I help fill a void for some!

This one is a little easier than many historical games AND a little more unique than most deckbuilders so I definitely wish you luck on making the time!