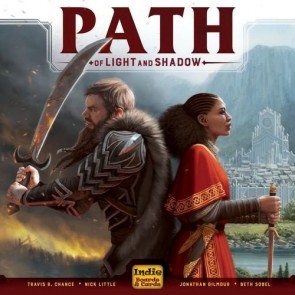 Path of Light and Shadow is, hands down, the most underrated game of the past couple of years. It is by no means perfect, but it may be one of my favorite games. It is a shame that just about no one has even heard about it.

Path of Light and Shadow does some amazing things with the deckbuilding genre While not really doing anything wild or different, it simply feels unlike any other deckbuilder. I’m honestly just kinda left in awe about how this game plays out every time.

It makes it possible for a fat deck strategy to go toe-to-toe with a heavy trashing strategy. It employs a tech tree reminiscent of Food Chain Magnate while also giving a similar feeling of great depth without using a ton of variability of setup. The theme was designed to evoke feelings of Daenerys’s journey in Game of Thrones by having one person traveling around building an army and it succeeds in this well.

It is by no means a perfect game. Its downtime means the optimal player count is somewhere between two and three and the dice add some luck which can be annoying if it strikes during a key moment. Aside from that this is a true gem that I think way too much of the hobby overlooked.

n815e replied the topic: #297203 17 May 2019 02:00
I keep looking at this one, unsure of it. It is unusual and appears interesting. I had store credit, recently, and almost chose this — but got Vengeance instead, which is another unusual and interesting title.
Read More...