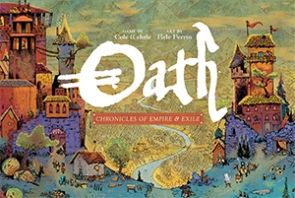 Ever since I can remember, the Chancellor has ruled this land. The title passed from parent to child. A long line of imperial dictat and unyielding authority. The world is changing. In the Provinces and the Hinterlands, there are whispers of leaders in waiting. They pull us to their cause, promising change and revolution. Whether these are hollow promises or solid manifestos, remains to be seen.

Oath is the latest game from Leder Games, designed by Cole Wherle with art by Kyle Ferrin. This is the team that brought us Root, so Oath has a lot to live up to. This is a very different beast to their previous work. The production is high quality, as it was with Root, and the game not only looks good, but a lot of the production choices help you grasp the rules.

Over the course of the game you will recruit denizens of the world to your cause, muster armies, whisper secrets, and buy favour all to bring down the chancellor and their regime. There is a central economy of supply allowing you to take actions and trading secrets for favour and vice versa. Getting your head around the flow of the economy is quite tricky and very different to other games I’ve played. 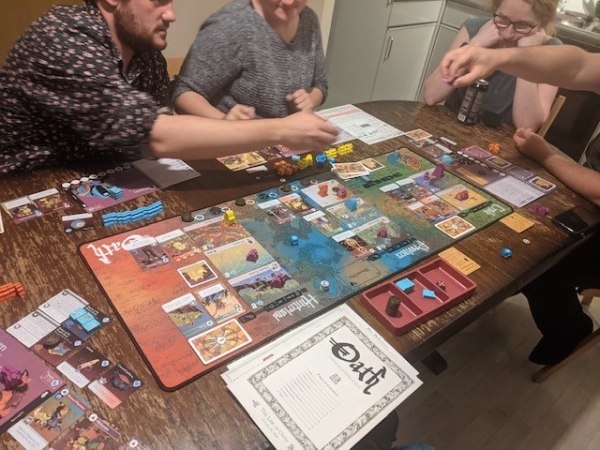 The paths to victory are numerous and it can be hard to plan your route. There are so many actions you could take on your turn, it is a hard to discern what you should do. You will not only have the basic actions at your disposal, but as the map becomes populated, you can use these new arrivals to forge your legacy. The options can change dramatically between turns, making it difficult to plan ahead. This led to significant downtime in our first play, and I don’t see that being completely alleviated in games to come.

There is satisfaction in forming a strategy from the chaos of the world as it evolves. Long term goals have to be improvised towards more than some may like, each turn being a struggle to wrestle the ever shifting landscape under your control. An engine can be built of course, but anything out in the world and not by your board is vulnerable to attack. Moments of synergy can be fleeting, so best to exploit them when you get the chance. In this way it does feel like you are taking advantage of a moment in the history of the world. 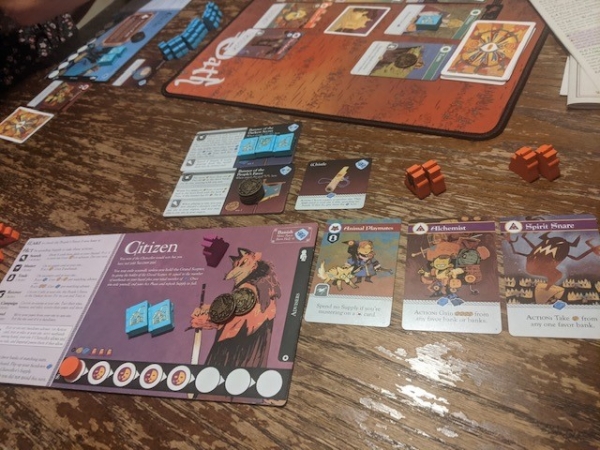 Fox Populi becomes a shill for the Chancellor

The narrative that emerges from the game is fantastic and I am looking forward to seeing the world in this box evolve. We found ourselves laughing and narrating as if we were the exiles and the chancellor of this land, forging a story of the people. I do worry about new players coming into a game, not really understanding the history of it or getting the inside jokes.

Oath is an ambitious game, and I am eager to play some more. It truly leans into its theme and on that level at least it seems to succeed. More plays will prove whether the systems will prove as compelling as the narrative. Know that your first game will be long, bewildering, and feel chaotic. Just underneath the surface of that chaos may be something very special.

This is a first thoughts review of Oath. I taught the game using the walkthrough. This is not an in depth review, just my impressions after an initial play. It should not be taken as my final critical verdict on the game. I backed the game on Kickstarter with my own money and the version you see here is the Kickstarter version of the game.

September 08, 2021
Rating
4.0
Oath
Oath has been the talk of the town this year. In this First Thoughts review, Iain gives you a feel for what that first foray into the Hinterlands is going to feel like.
T
thegiantbrain Top 50 Reviewer 36 reviews