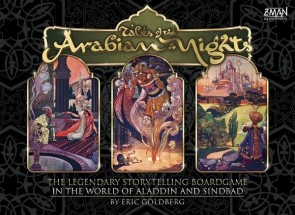 So yeah, maybe you heard that Tales of the Arabian Nights got reprinted.

Zev has done an incredible job with the new edition- some have been a little miffed about some of the minor changes, but I think everything that was changed was largely for the better, and more tales and a refinement of the game's focus to the storytelling element has done nothing but position the game in the absolute top tier of games that are on the market today. It's one of the greatest board games ever published, and if you're not digging it then hand your F:AT card in. If you say you love games with theme, narrative, drama, and surprise then you've got no excuse to not fall madly in love with TotAN. There's only two other games that I can think of that match actual gameplay with conceptual theme so well. Those other two are DUNE and BSG. And yeah, this game is up there.

One thing that I'm just not thrilled about at all with the new edition is that the board is awfully bland and, um, brown compared to the boards in both the West End Games and Edition Erlkoenig printings. I miss the brighter, livelier style, like the big illustrations of the places of power. Don't get me wrong, I think as a whole Universal Head turned in some outstanding work (a little heavy on the gradients for my tastes though) and the game looks incredible. But I do feel like the board was a missed opportunity to do something really special. And there's a missing connection on it down south of India.

But that's nitpicking. The game is great. There's really not a better game on the market right now- there's only games that are at least as good as it.