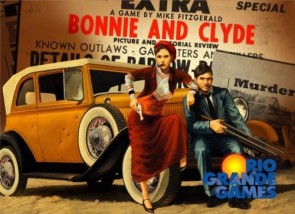 The latest (and not actually titled as such) Mystery Rummy game from Mike Fitzgerald centers around notorious outlaws Bonnie and Clyde.  How does this game stack up as a whole, and against the other titles in the series?  Find out inside.

Mike Fitzgerald's Mystery Rummy series are games that take the classic game of Rummy and intertwine thematic elements, usually dealing with crime and prominent outlaws from different eras, whether real or fictitious.  Previous titles have dealt with the unsolved Jack the Ripper killings, the vast criminal empire of Al Capone, Wyatt Earp's attempts to corral different outlaw gangs, the fictional adventures of Jeckyl and Hyde, and more.

For the uninitiated, Mystery Rummy uses the regular rules of Rummy as its core.  You collect sets or "melds" of cards, lay them out, and attempt to be the first player to get rid of all your cards.  Eacth Mystery Rummy title takes this basic formula and gives it thematic spice.  It generally does this through special victory and scoring conditions, as well as what are called "Gavel cards", special one-per-turn cards that are generally very powerful and can help in your ability to play out the cards you want.

Bonnie and Clyde uses a first for the series--a small board with numbered locations on it.  At the start of the hand, there are single cards each for Bonnie and Clyde, and they are shuffled with 8 other cards from the deck.  The board is seeded randomly, and the locations of Bonnie and Clyde start out unknown by each player.  A small "crime spree" car is placed on the first location, cards are dealt to each player based on the number playing, a starting player is chosen, and the game begins.

Then, after a meld, the car is automatically moved forward one space on the board.

"Layoffs" are where you play cards on an already existing meld, either yours or your opponent's.  The same rules apply for layoffs in term of revealing/keeping cards, however after you play a meld you may choose to move the car either forward or backward one space (whereas in a meld, you must move it forward.)

One thing not mentioned yet is that if the car is currently at the location you are playing melds or layoffs for, you actually play the cards sideways to indicate that these are worth double points at the end of the hand.

Lastly, to help you, you have the Ted Hinton card.  Unlike other Mystery Rummy games that have a variety of Gavel cards, Ted is the only one.  However, there are 15 of him in the deck and he lets you choose one of three abilities instead of being limited to just one; you can draw two cards, take a card from the discard pile, or peek at a card at any location--unless it's Bonnie or Clyde, you may choose to keep it, otherwise place it back at that location.

Play continues until one player goes out.  If a player goes out AND has both Bonnie and Clyde in front of him or her, then it's a shutout and only that player scores any points for the hand.  So there's some real incentive to scout locations, find out where the notorious outlaws are hiding, and go out.  Even if you don't find them both, they are worth 10 points apiece, a hefty bonus for one hand of play.

As for scoring, you simply do this--+10 for each of Bonnie or Clyde, +2 for each card playing upright in front of you, and +4 for each card oriented horizontally--i.e. those played when the crime spree car is at the matching location.

Players play several hands to an agreed upon score, and the first person to go above that score is the winner.

Bonnie and Clyde come in an oversized box, small but still larger than any of the actual Mystery Rummy titles.  Inside is a fold-out board that doesn't quite like to lay flat, a small crime spree car, the deck of cards, and the instructions.  The cards are a nice linen finish, and feel much nicer than the sometimes far too stiff cards from other games in the series such as Jack the Ripper.  The cards are also richly illustrated, though I have some complaints about that--more in a minute.

The board has pictures and news blurbs from their crime spree on each location.  Somewhat embarassingly, there are typos on the board, though I don't know if this was an oversight or replication of actual news blurbs.

The little crime spree car is depcited in the rules as black, but mine was bright orange.  I don't know if they thought someone might point the little car at a cop and he'd think it was a real car, but there ya go.

First up, I'm a big Mystery Rummy fan.  I've always had a soft spot for classic card games, and to see an old favorite spiced up is awesome.  The first one of the series I ever played was Jack the Ripper, and it still amazes me even today how thematic he made a Rummy game feel.  Evidence cards in melds show how the cops are closing in on the case.  When victims are killed, new evidence pops up (in the form of cards drawn for your hand.)  Going back to the scene lets you find things you may have missed--in this case, fishing through the discard pile for something that didn't seem important before, but might be now.  But you have to be careful, as if all the victims find their way into play, someone can play the "Ripper Escapes" card, shutting out their opponents as it is revealed they were the ripper all along.

It's not going to approach the level of the marriage of theme in something like War of the Ring, but I'll be damned if it doesn't pull of its theme very well.

Bonnie and Clyde is fun to play, but it really doesn't hit its thematic notes quite as well.  The board and card seeding feels rather abstract.  I like the hunt for the outlaws, but as the car moves around its difficult to say what this represents as it isn't necessarily their current location, only the location of the card.

Also, the graphic design is sort of a negative.  Other games in the series used bright, easily identifiable colors for the different types of cards, to make it easy to spot what was in play no matter where you were sitting.  The Bonnie and Clyde cards have nice illustrations, but there is no color coding, only a number and the location name written in plain white text, not always easy to spot from across the table.

The scoring and search for the outlaws does give it a different flavor, and I do enjoy it.  I definitely like the actual quality of the cards better.  The board adds an additional and welcome spatial element to the game.

Bonnie and Clyde is a lot of fun, but it's really in a tough spot.  For those new to the Mystery Rummy series, you're probably better off to seek out Jack the Ripper, as I think that's the best, most complete Mystery Rummy title out there.  For die-hard fans, this is a no-brainer, though the layout of the cards may give you some headaches as you're trying to scan and quickly see what cards have already been played.  Still, there's enough differences here to make it feel like a worthy addition for fans of the series.

All in all, it's another good offering from Mike Fitzgerald, just not quite the homerun that some of the earlier titles were.  However, it's affordable, in-print, and the cards and components are nicer than the U.S. Games Systems titles.

This one gets a thumbs up from me.  If you're a fan of the series already, you can add a half-point to my score.  If not, you can check this out, or you may be better served investigating one of the others first to see if these are the kinds of games for you.