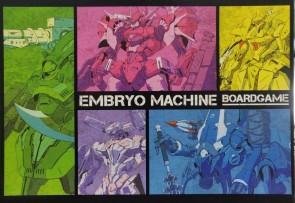 A compact and accessible wargame from Japan for 1-6 players ft. fast-paced mecha combat across a modular grid-based battlefield.

Embryo Machine is a mecha-themed competitive tabletop combat game featuring battles that unfold across modular boards and a combat system that utilizes a combination of card drafting, simultaneous action selection, and grid movement.

In Embryo Machine, up to six players engage in action-packed free-for-all or team-based showdowns making use of the game's grid battlefield and the cards they draft. Players start each game by first choosing which mecha—called Embryo Machines, or "EMs" for short—they'd like to pilot, according to their playstyle, and then utilize a deck of cards unique to their EM that comprises all of their unit's movement, equipment, and attacks.

Once players have their EMs set up, they then build the battlefield using the modular board that comes with the game. On the board are wide open fields, bottlenecks, stat-altering terrain, and various other obstacles to contend with. Players then position their EMs on the field using the two-sided custom standees, which feature each Embryos' art, and prepare to maneuver around the battlegrounds.

But the game looks surprisingly cool. Standees. Card drafting. Simultaneous action selection. All things I like.

And we're all a day late at this point. Hopefully this gets a slightly wider release than the initial kickstarter pledges and one of you guys around here reviews it...
Read More...