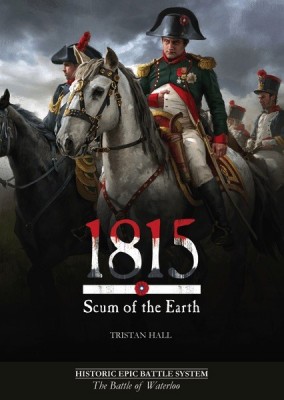 Relive the legendary Battle of Waterloo!

The third in the Historic Epic Battle System series of games.

Relive the legendary Battle of Waterloo!

18th June 1815, Napoleon Bonaparte is determined to rise back to power and claim all of Europe as his prize, but is stopped in his tracks by the might of the forces led by an unassuming yet undefeated Arthur Wellesley and his charismatic Prussian ally Blücher.

1815, Scum of the Earth is an asymmetric, competitive, tactical card game, and successor to the award-winning 1066, Tears to Many Mothers (and 1565, St. Elmo's Pay), with which it is fully compatible. Each player, as either the Duke of Wellington or Napoleon, musters troops and resources to overcome the various obstacles in their path before their armies clash in an epic battle over three farms forward of the ridge at Waterloo: Hougoumont, La Haye Sainte, and Papelotte.

Every beautiful card in the game is inspired by a real person or event from the time. With a focus on quick, tactical play and a thematic re-imagining of the events of the time, the game is non-collectable, and there is no deck building required. Each player simply grabs their deck and shuffles, then play begins.

ChristopherMD replied the topic: #320895 19 Mar 2021 16:53
In case anyone is wondering, Wellington called his soldiers the "scum of the Earth" because the lack of discipline among them at the time.
Read More...