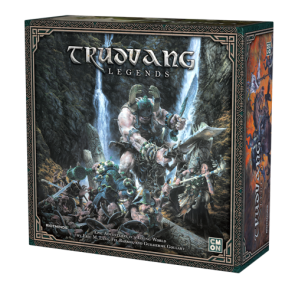 Game Name
Trudvang Legends
Publisher
CMON
There Will Be Games

CMON Limited will be launching a Kickstarter campaign for Trudvang Legends, an upcoming storytelling board game based on the successfully crowdfunded Swedish RPG: Trudvang Chronicles. Steeped in epic Nordic and Celtic myths and sagas, players will take the roles of legendary heroes who make their mark on a dynamic, everchanging fantasy world.

Designed by Eric M. Lang, Guilherme Goulart, and Fel Barros, Trudvang Legends thrusts players into a cycle of epic sagas, where their achievements will change not only the world itself, but the very rules by which gods, peoples and nature interact. They will quest through an interwoven series of Adventure Books, and the results of their choices will echo through history: changing the relationships between sovereign nations, usurping kings, creating new waygates, or even locking and unlocking parts of the map.

Change in Trudvang Legends manifests physically, as parts of the board actually change, making the actions of previous hero generations affect future sagas. However, the changes are only as permanent as long as history remembers them, which makes the game endlessly replayable, and even playing the same Adventure Book repeatedly will have a completely different feeling, because the world itself has changed. Heroes, following a path of destiny, will even become historical fixtures as they become Kings, Guildmasters or even Gods!

“We, at RiotMinds, could not ask for a better partner than CMON to elevate the Trudvang franchise.” says Theodore Bergquist, co-founder of RiotMinds. “The work we’ve seen so far is absolutely stunning and all the Trudvang fans out there will see the world come to life for sure.”

"The world of Trudvang presents us with an exciting opportunity to create a really innovative game based on the cycles of history and legend," said Lang. "We're looking to push some boundaries with this game, and really commit to the concept of a living world."

Trudvang Legends will launch on Kickstarter in Q2 of 2019.