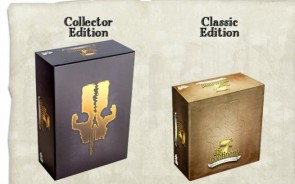 Serious Poulp has announced that they will be releasing a more "limited" version of The 7th Continent via direct sale in the 4th Quarter of 2019.

The 7th Continent “Classic Edition” will contain fewer curses and characters than the Kickstarter version. Three expansions will also be released: “The Icy Maze”, “The Forbidden Sanctuary” and “The Crystal Song.”

Ah_Pook replied the topic: #298943 27 Jun 2019 15:46
Looks like still way more game than 99% of people are going to see, even minus the KS stuff. I'm glad this one is going to available in some form, as I've heard it's real neat and the scalping is in full effect currently.

Ah_Pook replied the topic: #298946 27 Jun 2019 16:45
Thanks to the incredible generosity of @tk342 I'll be able to form my own opinion shortly, but I'm just generally for games being available and the thwarting of eBay scalpers.

ubarose wrote: We played the first curse and lost. I haven’t made up my mind about it yet. It’s interesting, but it didn’t feel exciting. Like, I didn’t care that we lost.

It definitely has a very laid back, cerebral Myst vibe. To me, the gradual learning of the map feels much more calculated than the risky atmosphere of a choose-your-adventure novel (this game’s DNA). The initial effect of its unveiling with cards feels novel & mysterious but it doesn’t take long for the abstractions to become more prominent, which insulates any kind of emotional investment in the exploration & atmosphere. It’s a strange shift that the game undergoes with repeated plays.

I will have to play it some more to find out if the hand management challenge and the puzzle presented be interesting enough for me, personally.
Read More...