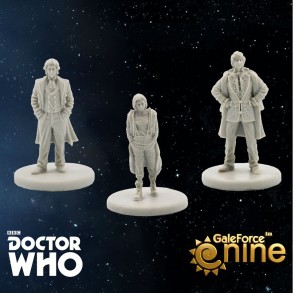 Gale Force Nine has announced that the 3rd & 8th Doctor Who: Time of the Daleks expansion will also contain the 13th Doctor, Jodie Whittaker.

Fans of the game have been concerned regarding the long delay in the release of the 3rd & 8th Doctor expansion, and many had begun to suspect that the expansion was going to be cancelled. However today Gale Force Nine announced, "we haven’t canceled the 3rd and 8th expansion. In fact, we added and expanded the scope of the game."

A release date and MSRP has not yet been offically announced.

Sagrilarus replied the topic: #301933 23 Sep 2019 12:46
More than a bit off-topic, but Peter Cushing played Doctor Who in a movie as well, and he's never mentioned. But Paul McGann is. Anybody know why that is?

Edit -- Cushing played Doctor Who is two movies, not one.

Charmlessman replied the topic: #302031 26 Sep 2019 17:15
There have been quite a few non-Canon Doctors over the years, but Cushing is unique in being the only one whose character name is "Dr Who" and is the only one who is a human.

AARU Productions saw the popularity of the TV show and quickly threw out 2 movies, in 2 successive years starring Cushing, and I believe the scripts were based on 2 Dalek Serials from the TV show. Dr Who is an eccentric inventor who invents a time machine called the Tardis (as opposed to the TARDIS in the TV show). He travels with his 2 grand daughters. The TV show Doctor had a Grand-daughter called Susan too, but I really don't understand that side of things, because I don't know if he really did have any family or not.

Paul McGann played the Eighth Doctor in the TV Movie that was actually supposed to act as a Pilot for a rebooted show, but poor ratings in the US made this a failed attempt. The Seventh Doctor, Sylvester McCoy, was in the TV movie and the regeneration is shown. McGann also appeared in a minisode webcast that was a prequel to The Day of the Doctor, where you also see the War Doctor was an additional Doctor between McGann and Eccleston's Ninth Doctor.

I don't think this makes anything any clearer, but it was an attempt at least.
Read More...