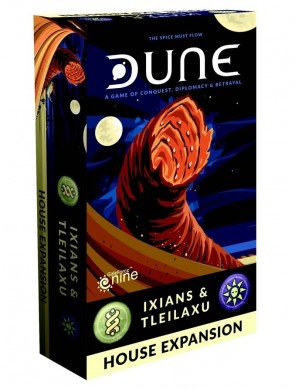 This expansion adds two new houses, the Ixians and the Tleilaxu, to the Dune board game.

Tleilaxu: Led by a small council of Tleilaxu Masters – the fanatic, xenophobic Tleilaxu were tolerated because of their useful genetic engineering superiority. Although underestimated and loathed by others, they hoped to someday dominate all.

Ixian: The cyborg, Prince Rhombur of House Vernius, leads the Ixians, masters of manufacturing and technologies only they know how to deploy.

This expansion also introduces new game mechanics to help you gain advantages over your rivals.

drewcula replied the topic: #305272 19 Dec 2019 09:48
Good on GF9. Maybe this push me towards picking up the new copy. I've been pleased with my OG, but I do like adding expansion boxes onto my shelf of consumption.

I don't even know if I'm being sarcastic or not. Damn, do I need another cup.

JoelCFC25 replied the topic: #305278 19 Dec 2019 10:16
This was probably inevitable. The original game did see expansion factions published (if memory serves) in an issue of Avalon Hill's The General, but they were widely panned and almost no one used them. There were also the box expansions for The Harvest and The Duel that most players consider a hot mess at best.

GF9 has the opportunity to fix some or all of that this time around. I'll be cautiously optimistic, but keep my Holtzmann shield activated due to all the rules ambiguities they left into this new edition.

Disgustipater replied the topic: #305282 19 Dec 2019 10:31
I’ve been playing this game for years and I find it difficult to imagine it being changed for the better at this point. But the expansion is cheap so I’ll pick it up just to have it.
Read More...