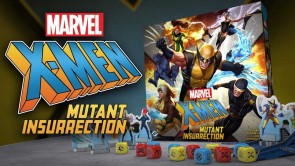 Fantasy Flight Games is proud to announce X-Men: Mutant Insurrection, a fast-paced, cooperative, dice-driven board game for one to six players!

Designed by Richard Launius and Brandon Perdue, X-Men: Mutant Insurrection invites you to travel across the globe on death-defying missions to recruit new mutants, capture criminals, protect innocent lives, and battle against some of the most iconic X-Men villains. You’ll build a team of mutants, with characters like Rogue, Wolverine, and Storm joining forces with Shadowcat, Magik, and Forge. Eight distinct scenarios await, each with their own challenges, and each leading to a no-holds-barred showdown against villains like Magneto, Dark Phoenix, or the Hellfire Club. The Blackbird is ready to launch—join your team and fight for the future!

I actually think elder sign with wolverine and a little more flavor is a good idea especially for mass market shelves, I'm just not that interested in it.
Read More...