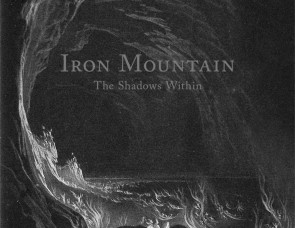 Shadows trapped in a mountain searching for a shaft of light.

Deep within the mountain a heart of iron beats. Slowly pumping molten ore through its iron veins. Shadows pray with frozen hands before the glowing stream. The iron god awoken. The iron law unbound.

Iron Mountain is a bleak and unforgiving game about fragile hopes better left behind. Players take on the roles of outcasts condemned to slave away their existence in an underground mine. Time and toil have reduced them to mere shadows flickering through winding tunnels and empty caves. But now the iron law that binds them has begun to loosen its grip. As they set out to reclaim their past lives and escape the mountain, hope quickly turns to despair. For what does it mean to be free in a world of shackles? And what becomes of a shadow once it steps outside and into the light?

The game is played over a series of turns until all shadows have either escaped the iron mountain or become lost. Players control multiple shadows, exploring the mountain by placing cave tiles, discovering items, and crafting iron artefacts. Every action causes tremors, and shadows are constantly trying to avoid triggering collapses and other disastrous events along the tremor track. The shadows must hurry to craft their artefacts and find the shaft of light before the mountain comes crashing down upon them. As they enter the shaft of light, players burn the shadow standees in a candle, hoping against hope that something better awaits them on the other side.

Iron Mountain is the second installment in the Trilogy of Lost Hope. The trilogy began with Tower of Silence and will end with Pesta. Visit Hopeless Games for more information.