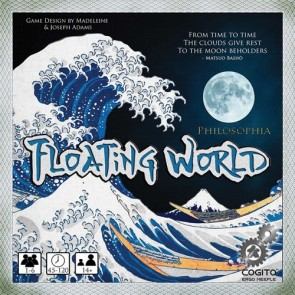 Philosophia: Floating World is a fully simultaneous, stand-alone, deckbuilding board game for 1 to 6 players, inspired by the artwork and ideas of Edo Japan. Floating World is built by gamers for gamers. Set in feudal Japan, in this stand- alone game you will play as one of six unique characters from that era. They each have an individual power, a mysterious secret and an intricate miniature. Explore this fascinating, beautiful world, build majestic pagodas and Shinto shrines, learn ancient eastern wisdom or fight fearsome monsters.

Shellhead replied the topic: #321496 31 Mar 2021 11:08
At a lower price point, I would be terribly tempted to buy this game. I like the setting, and the traditional style artwork really helps establish that setting. I like the sandbox approach and the diverse character types suggest that a wide range of stories could emerge from that sandbox. And there are wooden tokens, including little wooden torii arches. But it's a deckbuilder and the dice are only used in solitaire play, which are both negatives for me. And that mechanism of drawing an opponent's cards and then discarding one makes it seem like the best cards will rarely enter play. I would love to try before buying, but I doubt that anybody I know will buy it.