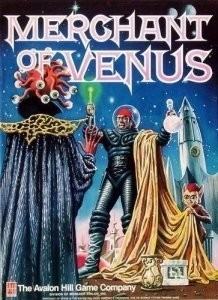 As many of our customers already know, back in October while we were in Essen, we announced a reprint of Merchant of Venus, a Richard Hamblen designed game, after 18 months of discussions directly with Mr. Hamblen.

To our surprise, a day later Fantasy Flight Games also announced a reprint of Merchant of Venus.  Of course, under normal conditions, with licensing contracts granting exclusivity, this should not have been possible.  Fantasy Flight Games had obtained their license of the game from a different party, and of course neither FFG nor Stronghold Games was aware of each other's pursuit of this game license.

Stronghold Games has been attempting to work out a resolution with the other licensing party since this first came to light.  We will continue to work with them and all interested parties until an amicable resolution is found.

For their part, Fantasy Flight Games has been fair and honest regarding the situation.  Neither FFG nor Stronghold Games wished for such an incident to arise, and both companies agree that this is an unfortunate situation in which both companies now find themselves.

Very importantly, Stronghold Games holds no ill-will towards Fantasy Flight Games.  We are big fans of this fine company, and we want all of our friends and supporters to be fans of FFG as well.

At this time we can not provide an estimate as to when this will be resolved.  However, we will provide our customers with any update that we can as we continue to work toward an amicable resolution.