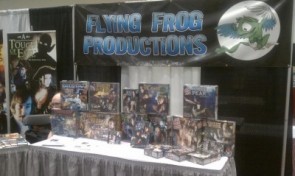 Flying Frog unveiled expansions for Last Night on Earth, Touch of Evil and Conquest of Planet Earth today at the GAMA Trade show. We will be updating our New and Upcoming Board Game as soon as we have additional information.

Last Night on Earth: Timber Peak The biggest expansion yet for LNOE. It can be added to LNOE or played on its own! Some survivors from Woodinvale head into the mountains seeking refuge in the logging town of Timber Peak - but it is overrun too. Timber Peak is also expected to add a new type of zombie. Release Late Summer/Early Fall 2012.

A Touch of Evil: The Coast is expected to add 4 new Heroes and a full size game board to add to the main board. Release Summer 2012.

Conquest of Planet Earth: Apocalypse adds new boards and saucers to expand the game to 6 players. Features new alien races to play, including the Martian Confederation (the Martians from Invasion from Outer Space). Release Holiday 2012