Airborne In Your Pocket Kickstarter campaign entering it's last week! 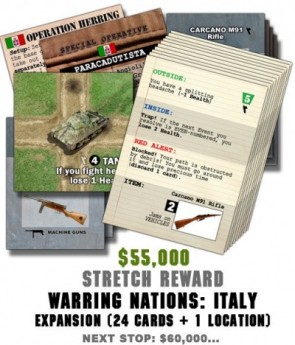 Publisher
Valley Games
There Will Be Games

Airborne In Your Pocket is a fast-paced game that puts you in the boots of an Allied paratrooper on D-Day! Jump behind enemy lines and infiltrate a German bunker!

It has been a successful campaign we must admit and would like to thank all the supporters who have helped us reach our goal.  However, many of the supporters are really hoping to get the lovely "One Box to Hold Them All" and we are still just under $30k away from that goal.

Come take a look at the campaign site (http://www.kickstarter.com/projects/1325766284/airborne-in-your-pocket-board-game) and watch the movie for this great little game.  Currently, if you pledge $70 you get over $120 in game product (take a look at the objective achieved so far below)!  And that's not including the future stretch rewards if we reach them.

And look at that limited edition Dick Winters sculpt you'll get.  How can you resist?

Let's get the "One Box to Hold Them All"!

On the night before June 6th, 1944, more than ten thousand Allied paratroopers were dropped into enemy territory to prepare the Normandy landings. As the soldiers like to say, when Hitler built his famed Atlantic Wall, he forgot to install a roof…

Under heavy clouds, the troop-carrying planes were blasted by German anti-aircraft fire, scattering their airborne troops everywhere but where they were supposed to be.

You are one of these paratroopers. And as luck turns out, the winds have blown you directly where you are needed the most! Ahead, a hidden German bunker containing two 24.0 cm Schiffskanone L/50 Guns, pointed directly at the beaches. Only you can stop them from killing the Allied troops!

You are alone, and lost your equipment bag during the jump. The only things you have left are your trusted Colt Pistol and your ingenuity. You look at your watch: it’s 0700, the landings are starting. Will you have time to sabotage the German battery before it decimates the men on the beach? All you need is some explosives...

A light war game for 1-4 players, with an average gaming time of 10 minutes.

Discuss this article
Log in to comment
Posts in discussion: Airborne In Your Pocket Kickstarter campaign entering it's last week!