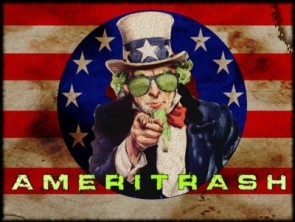 Ameritrash is in the late stages of playtesting. Those interested in playtesting, or just trying the game out, can find the Vassal mod on the vassalengine.org website.

In the far distant future, the world is recovering from global devastation brought on by both nuclear and biological warfare. The area occupied by the former United States of America is one of the first land areas to experience a rebirth of civilization. Old technology is salvaged and relearned. Eight distinct regions emerge, each with its own ideals, but all predicated on peace. No one wants to repeat the mistakes of the past. Almost no one…

Over time, four Overlords emerge. Vying for wealth and power, each establishes his own ragtag army. Slowly, their minions spread throughout the eight habitable regions. Death and destruction follow in their wake as each faction battles the other for land, fuel, wealth, and power. Which will triumph over the others, bringing a final, lasting peace to the land? Only time and Thompson machine guns will tell.

The boardgame Ameritrash, like its namesake gaming genre, is an exciting, tension-filled game, rich in theme, filled with player conflict, and possessing a large amount of dice! Two to four players assume the role of an Overlord of a military faction intent on securing as much plunder and power as possible. During the span of five turns, players move their ramshackle units across the gameboard, attempting to capture objectives, pillage wealth, and weaken enemy factions.

Quick to learn and fun to play, Ameritrash is game of low to moderate complexity, and heavy firepower.