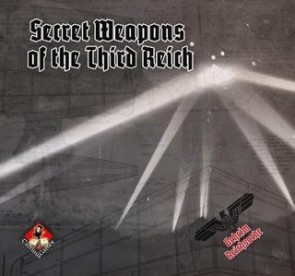 Publisher
The Game Crafter
There Will Be Games

The Allies are marching to Berlin, will you complete the secret weapons to turn the tide of war? Secret Weapons of the Third Reich is a weirdly addictive semi-cooperative, semi-competitive worker placement board game for 1 - 4 players, designed for all fans of science fiction and alternate history.

After several months of intense play-testing, the first edition of Secret Weapons of the Third Reich is now finally ready!

Secret Weapons of the Third Reich is a semi-cooperative and semi-competitive worker placement game simulating arms development in Nazi Germany during World War II, designed for all fans of science fiction and alternate history. Players will discover and recreate what has been hidden behind the weird allegations and incredible tales of Nazi technology: from the secret submarine bases in Greenland to the mysterious Base 211 in Neuschwabenland, Antarctica. From the famous V-1 buzz bombs and V-2 rockets to the unlikely flying saucers derived from the work of Nikola Tesla, and so on to the German Nuclear Plan or even the unbelievable orbital solar gun conceived by Hermann Oberth!

The game can be purchased on TheGameCrafter.

All game details, photos and videos can be found here.

But the theme sounds awesome.

calvinus replied the topic: #205215 01 Jul 2015 06:03
I got a similar remark on TheGameBox forum, and I answered that the worker placement is not the predominant mechanic. Play of event cards, action planning, intrigues, backstabbing and technology research are probably elements that could be interesting for you.
Read More...