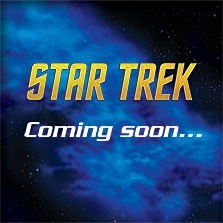 Gale Force 9, a Battlefront Group Company, announced that it will launch a new series of Star Trek games in the Summer 2016.

“We are both humbled and excited to add to the legacy of Star Trek,” said John-Paul Brisigotti, CEO of the Battlefront Group. “Building on the great history and depth of Star Trek, the team at Gale Force Nine are creating a compelling game system that will explore all corners of the universe and bring gamers and fans alike into the world of Star Trek like nothing that’s come before.”

Gale Force 9 has extensive experience with licensed games based on media properties, producing games based on Firefly, Spartacus, Homeland, and others.

Applejack replied the topic: #207780 03 Aug 2015 07:32
Is "Star Trek" still a draw for people? I'm as much a fan as anybody, but I didn't really care for the J. J. Abrams reboot, and there hasn't been a TV series since "Enterprise". How much more is there to explore in the "Star Trek" universe? It used to be a very relevant show, but it seems "Star Trek" has become just another action sci-fi movie franchise.

I would actually wager that this is in the old universe.

Yes, Star Trek is still relevant. Love the old stuff, love the new stuff. Wouldn't have gotten into the old stuff if the new stuff wasn't so damned awesome. I prefer TOS now, but the reboot did its job, young people care about Star Trek.

Hex Sinister replied the topic: #207877 03 Aug 2015 17:26
I'm probably alone here but I would really love a ST game that just had generic star fleet dudes instead of well... you know. But it's not gonna happen, I get it. I think that would be way fuckin' better though.

jpat replied the topic: #207880 03 Aug 2015 18:07
Certainly GF9's licensed-property success earns them a look or two at anything Star Trek related, but I do agree with the undercurrent of Star Trek being basically culturally irrelevant at this point. After 2009's Star Trek, which I thought was refreshing, Into Darkness was basically just shitting the bed. It's been 16 years since the end of the last series that if not universally popular was not sharply polarizing or derided, and Star Trek has always been primarily a TV phenomenon despite middling success on film, in books, and in other media.

southernman replied the topic: #207934 04 Aug 2015 12:12
Can someone please tell them that I have a son probably going to university in two years so all games and expansions need to be finished by then so he doesn't starve for the following three years !

This needs to be TNG/DS9/VOY era or I have zero interest, or at least the WizKids-ified TOS/TNG combined thing which shouldn't work but somehow does.

Anything either entirely TOS or JJ Abrams related can die in a fire. TOS is campy and bad. Abrams era is a middling to bad sci fi universe with Trek trappings.

Next Generation/Deep Space 9/Voyager, Borg/Cardassians/Dominion war/Species 8472 is the good stuff that's actually interesting and why they ever left that universe behind is so beyond me. I could watch another dozen captains try to prevent a full out Klingon/Romulan war through diplomacy and espionage in a dozen ways and still be entertained, but I cannot deal with another Captain Kirk's Dick Goes Rogue and Gets Everyone in Trouble plot.

Amazon, Netflix, Crackle, Hulu, HBO, Showtime, PBS, FX, and AMC are all producing smart, original, risk taking content, people actually know who Dr. Who is, Star Wars is about to have it's second major revolution of the 21st century, BSG came back and was successful, and we can't get a sniff of a 24th century Trek series? What the hell? Why is this so hard.

jpat wrote: Certainly GF9's licensed-property success earns them a look or two at anything Star Trek related, but I do agree with the undercurrent of Star Trek being basically culturally irrelevant at this point. After 2009's Star Trek, which I thought was refreshing, Into Darkness was basically just shitting the bed. It's been 16 years since the end of the last series that if not universally popular was not sharply polarizing or derided, and Star Trek has always been primarily a TV phenomenon despite middling success on film, in books, and in other media.

Into Darkness was bad for the exact same reason that Prometheus, World War Z (the movie), and the finale to Lost were all bad.

OldHippy replied the topic: #207946 04 Aug 2015 15:41
If they can make this an adventure game with very minimal combat I might be interested. I would like it to try and explore sci-fi theme's and allow for a fun story to develop that we truly get to interact with and try to 'solve' (for lack of a better word), kind of like the first three seasons of TOS (that and TNG are about the only Trek things I love). If they can do that... I'm in. If it's just another action game in space I'm not really interested because that is not what I love about Star Trek.
Read More...