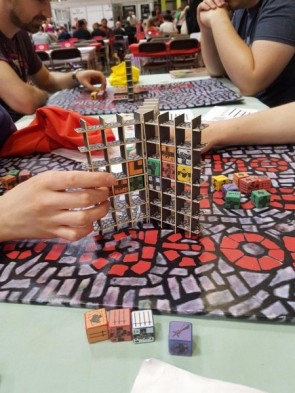 This train is full of nerds. They're crammed in like geeky sardines, like the filling in a maths sandwich. The people in front of me are talking about Paranoia. The man standing in the aisle is wearing a Catan t-Shirt. There is unshorn hair and beard everywhere. I feel sorry for the poor woman next to me, who is an ordinary Saturday traveller trying to get to Coventry.

Fortunately for her, all us nerds get out after one stop. The National Exhibition Centre in Birmingham, home to the UK Games Expo.

I was so tired that weekend that at one point I found myself having a conversation with a door. And I've never been to such a big show before: it was pretty overwhelming. So I didn't get to try anything like all the things I wanted to. But still, I met PEOPLE and played GAMES and now I have OPINIONS.

I'll share them over the next few weeks. First, though, there are two games I played currently running Kickstarters. So it seemed a good idea to start with those.

At the expo, I went to see a stage show called Knightmare. This will mean nothing to most of our American readers, but it was a staple of British kids TV in the 80's. I won't bore you with the details but it was very funny and demonstrated, beyond doubt, that nostalgia sells.

Escape the Dark Castle is a box of barrel-aged, grand-cru nostalgia for 80's gamers. All the cards have pen-ink drawings reminiscent of gamebooks. It has a video advert that riffs on those for HeroQuest. There's even a soundtrack available on cassette tape, although it's on Spotify too.

What attracted me to the game, though, was the theme. It's an adventure, but not with your typical heroic adventurers. Players are instead weak, injured, flea-bitten prisoners trying to escape a nightmare dungeon. It's a very simple, quick, co-operative, text-heavy title which would make a great filler or family game. I don't want to say too much more, as I'm going to give it a full review in time.

The base game is already out and doing well. One player I spoke to said it felt like a really fun game to lose, which seems high praise.  Its biggest drawback, that I can see, is that there are 45 dungeon cards and you use 15 in each game so the novelty may wear off quite fast. If so the solution may be this expansion Kickstarter for lots more content.

Hidden away from the big stands of the big publishers was one of the oddest-looking things at the show. Players sitting opposite one another, pushing hand-stickered dice into a stand-up waffle grid. It was clearly a labour of love from an indie designer, and I was immediately keen to play.

At first, this seemed like a pointless dice-fest. What made it work is the infuriating, thrilling unknown of what's happening on your opponent's side of the waffle. You can see what dice they're adding - and use the corridors on them if they fit your map - but not the faces on their side. So using spell effects to remove or rotate them can be a waste of effort, or even backfire.

It's a most unusual and effective use of hidden information. One spell lets you take a peek at what they're doing. But it also lets you choose your dice for the turn instead of blindly drawing from a bag, which is super useful. Make the wrong call and you could lose the game.

Even with this, it remains very random. And I worry that after a few games you'd learn the dice, which would remove some of that delicious thirst to know what's happening on the other side. But still, it's pretty cheap to take a bet on a clever new mechanic. And the designer promised me the final version will have proper dice, not stickers. There's still a few days left on the Kickstarter campaign.

This isn't on Kickstarter yet, but I suspect it will be pretty soon. I saw a preview of this among the press releases and was really keen to try it because it sounded so novel. The players are building a coral reef by stacking dice in a 3-d grid. You roll your dice and add them to the stack, but you can only put a higher number atop a lower one.

Your score is determined by the number of dice pips showing once all the dice are in the stack and you can get bonuses by making particular shapes, in three dimensions, as the coral grows.

It sounded like a quite wonderful blend of dice and strategy in a really new configuration. In practice, it fell pretty flat. It's a simple game but there's a bunch of very euro-y supporting mechanics and the play is very dry and analytical. Trying to see the opportunities to make shapes both for yourself and to block other players was far more like geometry class than fun. Although that might have been lack of sleep and coffee.

Fundamentally, though, it's got two glaring physical problems which I suspect might sink the game faster than a weighted diver. Once you've used a dice to claim a shape, you can't re-use yet. Yet you can't mark it either. It's down to everyone's memory to determine what's a valid play and what's not. I've rarely seen a bigger argument waiting to happen in a game outside of Diplomacy. And unused dice get buried in the stack really fast so it becomes impossible to determine what valid shapes you can claim.

So if it does make it as far as Kickstarter, without a whole lot more development it's likely one to avoid, no matter how charming it sounds.

I'm a fan of Escape the Dark Castle. It's simple and somewhat on rails, but it's atmospheric and completely breezy to get out and play. It comes across as an Ameritrash version of FF's Friday.