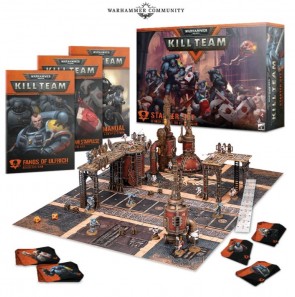 The new starter set will contain everything new players need to jump right in and start playing. The box holds two complete teams with predetermined wargear and specialisms:  The Fangs of Ulfrich which includes 5 Primaris Reavers from the Space Wolves Chapter, and the T’au Empire’s Advance Team Starpulse which includes 10 Fire Warriors and 2 Tau Drones. Also included are the Kill Team Core Manual, two booklets describing the teams, 36 universal Tactics cards, 22 cards exclusive to the included teams, a double-sided game board, six frames of Sector Mechanicus scenery pieces, a ruler, tokens, and dice.

The models and scenery are also compatible with Warhammer 40,000. The rule book has not changed and is the same one that is currently available to be purchased separately. Additionally, the two teams included in this boxed set are the same as those previously released for individual purchase.