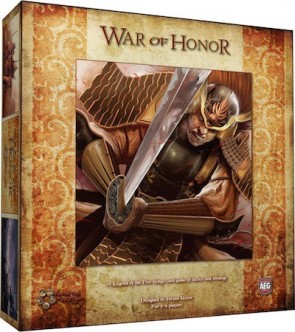 War of Honor is a Legend of the Five Rings game of strategies and tactics for 2-4 players. It allows players to follow their own path to victory through political, honorable, military and spiritual deeds. The game brings a whole new dimension and dynamic to multiplayer Legend of the Five Rings and is suitable for play with cards from the existing arc or older card collections.

The game is played using L5R CCG cards, but a collection of cards is not required to play the game. It comes with four pre-built decks, ready to go right out of the box! Featuring tiles that determine alliances and wars, including strategies for placement of tiles, War of Honor incorporates boardgame sensibilities into the L5R CCG, making it a great way for those somewhat wary of a CCG to try this dynamic and proven game.

The Lion Clan marshals its forces at the Plains of Thunder, determined to exact revenge against the scheming Scorpion Clan. The Dragon Clan attempts to reconcile the two armies, even as it refuses to reveal evidence that might exonerate the Lion, and incriminate the Scorpion. And the Phoenix Clan races to intervene before the situation becomes a War of Honor to turn the Empire against itself.

In this exciting new multiplayer format for the Legend of the Five Rings collectible card game, you will form and dissolve alliances, engage in political maneuverings, and wage mighty battles to determine which Clan will triumph.