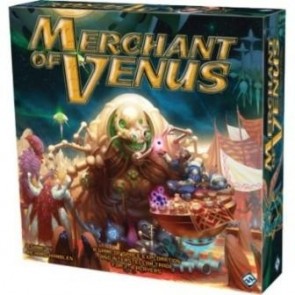 Fantasy Flight Games (FFG) and Stronghold Games (SG) are pleased to have reached a favorable resolution regarding the publishing of a new edition of the classic “Merchant of Venus” board game.

In the Fall of 2011, both SG and FFG announced separate plans to re-publish the classic “Merchant of Venus” board game. Today, FFG and SG jointly announce that FFG will proceed to publish its new edition of “Merchant of Venus,” while SG’s version of the game will be cancelled. SG will act as a consultant on FFG’s version of the game, bringing some of SG’s creative vision to the final release.

“This was a difficult and confusing situation,” said Christian T. Petersen, CEO of Fantasy Flight Games. “All parties involved clearly had the best intentions in mind for the game, and none sought to cause damage to the other company. After a period of discussion and discovery, I’m thrilled that all parties now have clarity on the situation. I want to express my gratitude to WOTC for their assistance in this matter, and especially to Stephen Buonocore, the President of Stronghold Games, who has been both professional and practical in untangling this issue.”

“While this was an unfortunate situation for all parties, everyone is a winner in the end,” said Stephen M. Buonocore, President of Stronghold Games. “Fantasy Flight Games and Stronghold Games have forged a great bond that will last long after this event. In the face of crisis, Christian Petersen was a true leader who worked tirelessly to resolve the matter, and I am very thankful to him for that. The WOTC team was also instrumental in getting this done smoothly, and they too should be lauded. And above all, gamers worldwide are the biggest winners, since they will have this great game back in print, published by a great company, Fantasy Flight Games.” FFG is planning to release its new version of “Merchant of Venus” in Fall 2012. The new edition will feature both the classic game design by Richard Hamblen, as well as an updated game inspired by the original, designed by FFG’s Rob Kouba. Stronghold Games is in discussion with Richard Hamblen with regard to other game designs, both old and new ones, which they hope to publish in 2013.

About Fantasy Flight Games:
Roseville, Minnesota’s Fantasy Flight Games is a publisher of board, card, and role-playing games. Founded in 1995 by Christian T. Petersen, Fantasy Flight has published hundreds of successful titles, including Battlestar Galactica: The Board Game, the Lord of the Rings series of board games; board and card games based on H.P. Lovecraft’s Cthulhu mythos and George R. R. Martin’s A Game of Thrones, and many original board games such as Twilight Imperium, Runebound, and Descent: Journeys in the Dark. www.FantasyFlightGames.com

About Stronghold Games
Stronghold Games LLC is a publisher of high-quality board games and card games within the hobby game industry. Since the founding of the company in 2009, Stronghold Games has released numerous successful games, including the best-selling Survive: Escape From Atlantis!, which has just been reprinted in a 30th Anniversary Edition, the award-winning Confusion: Espionage and Deception in the Cold War, and the highly-regarded deck-building game, Core Worlds, which is slated for an expansion in late 2012.  Stronghold Games has also found great co-publishing opportunities, bringing to North America Panic Station, Lost Temple, and Revolver: The Wild West Gunfighting Game. Stronghold Games LLC is a Limited Liability Company formed in the State of Delaware, USA.
www.StrongholdGames.com

Tweet
Discuss this article
Log in to comment
Posts in discussion: Fantasy Flight Games and Stronghold Games Announce Resolution to The “Merchant Of Venus” Board Game Publishing