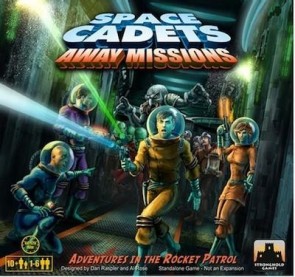 Stronghold Games is proud to declare 2014 as “The Year of Space Cadets” as it announces 3 new game titles for their award-winning and best-selling Space Cadets line of games.

Space Cadets: Away Missions is a standalone game in the Space Cadets universe. It is a cooperative, tactical action game for 1-6 players, artistically set in the Golden Age of science fiction, and thematically a prequel to the original Space Cadets. Players take on the roles of adventurous human spacemen as they move outside the relative safety of their ship, exploring UFOs, acquiring Alien technology, and fighting hostile extraterrestrials. Space Cadets: Away Missions contains 15 scenarios linked in a campaign story arc, and utilizes modular hexagonal map tiles to create the locations that the players explore on their Away Missions. Cooperation and tactical planning are essential if the spacemen hope to overcome the relentless onslaught of Alien creatures.

Space Cadets: Dice Duel – Die Fighter is the first expansion to last year’s smash-hit Space Cadets: Dice Duel, “The Team vs. Team, Real-time, Dice-Rolling Game of Starship Combat!”, supporting 2 new play modes. In Carrier Strike mode, each team will command a second ship on the board as well, which is a faster, more maneuverable, but more fragile Fighter-class ship. With 4 ships on the board, Carrier Strike mode will now support up to 10 players. In Fighter Duel mode, 2 players man fighters in head-to-head combat for quick and intense battles. Die Fighter expansion now provides support for 2 to 10 players.

Space Cadets: Resistance Is Mostly Futile is the first expansion for the original Space Cadets. In this expansion, each station has access to the Psycho-Acoustic Neural Interface Control (P.A.N.I.C.) button, which gives players new options if things aren't going quite as expected. This expansion also includes new Missions, including quick play ones for a faster game, new enemies like the mysterious space beasts, new Map Tiles with new hazards, and other challenges that will test the most seasoned crew of Space Cadets.

"In proclaiming 2014 ‘The Year of Space Cadets’, Stronghold Games is sending a clear message to our fans”, said Stephen Buonocore, President of Stronghold Games. “We will continue to support our major game lines like ‘Space Cadets’, as well as ‘Survive!’ and ‘Core Worlds’, bringing out new games and expansions for these great, highly-regarded game lines. We are very excited to be working on these projects this year.”

“We are very excited to have ‘Away Missions’ be a part of the ever expanding Space Cadets universe. Many thanks to both the Engelsteins and Stronghold Games for this opportunity, and to artist Bill Bricker for turning our ideas into the coolest looking board game this side of Alpha Centauri”, said co-designers Dan Raspler and Al Rose. “And please, keep watching the skies!”

"We are thrilled about the reception that the Space Cadets games have received from players”, said Sydney Engelstein, designer of Space Cadets and Space Cadets: Dice Duel. Adds co-designer Geoff Engelstein, “Away Missions and the new expansions give us the opportunity to make the Space Cadets universe a richer and more dynamic place, while keeping innovative cooperative play at its core."