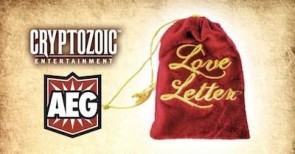 Cryptozoic Entertainment™, the premier developer of original and licensed games and Alderac Entertainment Group (AEG), publishers of the award winning Legend of the Five Rings, today announce that they have entered into a strategic partnership to release new editions of AEG’s worldwide sensation, Love Letter. Leveraging their established relationships, Cryptozoic announced that the first editions to be released will be Adventure Time, DC Comics and The Hobbit.

In the original Love Letter your goal is to deliver your love letter into the Princess’s hands while keeping other players’ letters away. Powerful cards lead to early gains, but might make you a target. If you rely on weaker cards for too long and your letter may be tossed in the fire!

These new versions of Love Letter will feature the same easy to learn and engaging play, with some new effects designed in conjunction with Seiji Kanai, unique to each exciting edition.

”We are thrilled to be working with AEG,” says Cryptozoic President Scott Gaeta. “Our two companies have a lot in common and we think this partnership is a great example of what makes our industry so special."

The game will be co-published by Cryptozoic Entertainment and AEG. These titles will be the "first of many" games to be released as part of this partnership.

"AEG is thrilled to bring Love Letter to the public in these new editions. Playing Adventure Time Love Letter will feel different than The Hobbit or Downton Abbey, but all will be true to the original design and engaging play,” says AEG’s Director of Marketing Todd Rowland”