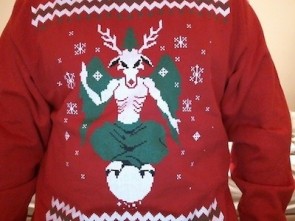 Join us for a "down home" diabolical Holiday celebration!

F:AT Secret Satan 2013 left in its wake a lot of hurt feelings, confusion and probably at least one broken home. After the fallout of the infamous "dirty drawers" incident had subsided, many F:ATties were wondering if that was going to be our last Christmas together. Others claimed that they would never again participate in this, our most unholy and sacreligious  of fellowship rites. My own faith in Secret Satan waivered, and drew up diabolical plans to get everyone together for a an old fashioned Secret Santa but with the shock reveal at the end that you sent a really nice present to the person that sent you garbage last year. But a rallying cry issued forth in our forums and in PMs, and that rallying cry was "I want a box of random junk from a stranger!" So once again, it is my pleasure to present you all with our annual "gift" exchange program.

Sign up starts TODAY. PM me with your name, address and whether or not you will ship internationally. Most folks don't want to, and that's fine, but if you do ship overseas it greases the wheels a bit.  I usually can accomodate F:ATties in Canada, Europe and Australia that want to do local shipping only. Targets will be distributed MONDAY, DECEMBER 1st. Packages should be mailed in time for Christmas Eve. You can use the Secret Satan sock puppet account to communicate with your target.

BUT LISTEN. This year there are rules. You like rules, don't you gamer? The safety word is "Flaherty".

1) You MUST send at least one semi-decent, hobby-oriented board, card, role-playing or miniature game of SOME value. We had a couple of packages last year that contained junk that probably cost less than the box to ship it in. Please don't be lazy- don't raid the thrift store and ship somebody a 1987 copy of Pictionary. Put some effort into it. Instead of shipping that, why not that ancient collection of Wyvern cards you have tucked away in tuck boxes. That would be pretty funny.

2) NO WISH LISTS. You get what you get, and you don't pitch a fit. Period. You are at the mercy of your selected Secert Satan, who may or not give you something really awesome. If you decide to send somebody something you know they really want, that's great, Merry Christmas. But that's on you for giving into the temptation to do good.

3) DO NOT EXPECT 1:1 TRADE VALUES, ANYTHING GOOD OR TO BE BLOWN AWAY. Expect to recieve a package worth about ten cents and temper your expectations from there. The idea is NOT to maybe luck out and get something really cool. The idea is to get a bunch of random stuff and have a laugh about it. Crybabyism will not be tolerated.

4) EXERCISE COMMON SENSE. Random pack-ins are fun, but do not send anything that you would be ashamed, embarassed or possibly arrested for opening in front of mixed company. If you know your target would "get" you sending them a giant Hitler-shaped sex toy- go for it. But maybe let's don't send that to Jeb. If you do not really know your target, keep any joke items broad and funny for everybody. Also- random stuff that should be in a recycling bin or trash can is not funny. Nor is food or anything to do with the human body.

5) YOU MUST POST PHOTOGRAPHIC EVIDENCE IN OUR ANNUAL SECRET SATAN FORUMS. No exceptions, no excuses. Part of the fun of this is seeing what everybody got. It's no fun if you sit in silence with your Secret Satan package and nobody ever knows what you got.

Failure to follow these rules will be dealt with swiftly and without mercy. You will be exposed and banned forever from participating in F:AT Secret Satan. Don't spoil it for yourself or for your target.

Rules aside, HAVE FUN with this F:AT family tradition!

****FAILURE TO HAVE FUN IS THE SOLE RESPONSIBILITY OF THE PARTICIPANT****