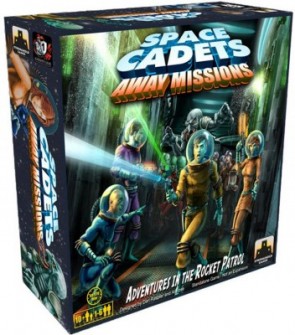 Launching As A Kickstarter Project,
Featuring As Many As 100 Plastic Miniatures,
With Free Worldwide Shipping For Early Adopters

Stronghold Games is proud to announce Space Cadets: Away Missions, the third standalone game in the Space Cadets franchise of cooperative and team space-themed games.

Space Cadets: Away Missions is a cooperative, scenario-based, tactical action game set in the Golden Age of science fiction, making it a thematic prequel to the first two Space Cadets games. In this game, players take on the roles of adventurous human spacemen ("Rocketeers") who explore UFOs, acquire alien technology and fight hordes of hostile extraterrestrials.

Each turn, Rocketeers spend action points on activities such as firing atomic rifles, analyzing exotic equipment, or subduing the malicious Brain-in-a-Jar. When the Rocketeers are finished, the Aliens take their turns by following simple movement and combat protocols. Seven types of hostile Aliens threaten the Rocketeers, from the repulsive Mind Leeches to the rampaging titanic Sentinels.

Space Cadets: Away Missions has scenarios linked in a campaign story arc. These "Away Missions" are set at various locations, feature different combinations of Aliens, and have diverse objectives for the Rocketeers to achieve. Hexagonal map tiles are arranged to form the locations, such as flying saucers, rocket ships, and space stations. Cooperation, tactical planning and a bit of luck are essential if the Rocketeers are to overcome the relentless horde of little green men.

In a departure from its previous publications, Stronghold Games will launch a Kickstarter campaign for this game, which is the most ambitious project in its 5+ years in the hobby game industry. By utilizing Kickstarter for this publication, Space Cadets: Away Missions will contain as many as 100 detailed, professionally-sculpted plastic miniatures to represent the heroic Rocketeers and the rampaging Aliens. Stronghold Games will print this impressive project at Ludofact Germany, the leading printer of hobby games in the world, where the best-selling miniatures board games in the world also have been printed.

As an added bonus, free worldwide shipping will be offered to the Early Adopter Pledge Levels of the Kickstarter campaign for Space Cadets: Away Missions. The project is scheduled to deliver to Kickstarter backers in August 2015. The game will be available in retail venues at a date after it ships to all backers.

The Kickstarter for Space Cadets: Away Missions will begin within days of this announcement.

"We wanted to publish a game in our Space Cadets franchise, which not only has incredible gameplay, but also is beautiful to behold on the table", said Stephen Buonocore, President of Stronghold Games. "With as many as 100 plastic miniatures, Space Cadets: Away Missions moves us into an entirely new market. To ensure that this market does exist for us, we are employing Kickstarter for this project only. We are using Kickstarter in the same manner as much larger companies than us have done in the past when they reached into new markets."