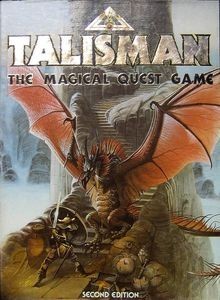 Game Name
Talisman
There Will Be Games

USAopoly will release two new licensed versions of Talisman in North America and other select regions later this year. This will be the first time a licensed version of the game will be available. The new partnership grants USAopoly international rights to distribute co-branded renditions of the “Magical Quest Game” via distributors, online marketplaces and beyond.

“Talisman is one of the most respected table top games of all time and served as a gateway into gaming for many people,” Candace Brenner, VP of Marketing for USAopoly. “Working with some of the most cherished licenses in the world to add our own heroic twists to the game, these upcoming thematic versions will let an entire new audience experience the grand adventure that is Talisman!”

First released in 1983, Talisman has sold millions of copies worldwide. The game’s fourth edition, which was released in 2009, was granted the Ludoteca Ideale Official Selection award.

Media and retailers can learn more about the partnership and details on the upcoming games at New York Toy Fair (Booth #203). More about the licensed versions will be announced later this year.

About Talisman
Talisman, the magical quest game from Games Workshop, is a classic board game that has been enjoyed by fantasy fans for 35 years. As one of many characters, including warriors, rogues and magicians, the player embarks on a perilous adventure to find and claim the Crown of Command – a magical artifact with the power to destroy any rival and make the bearer the ruler of the kingdom. It’s a game of skillful decision-making based on dice and cards. Nomad Games brought the multiplayer version of the top-selling Games Workshop board game to PC, tablets and mobile devices in 2012, with the brand selling over one million units to date.

I don't know what to think about that.

Nintalisman. Turn people into a goomba.

jeb replied the topic: #291734 06 Feb 2019 22:22
The Hogwarts Battle game is actually fun, and has great components. I am actually happy about this. Honestly, kids should be able to play TALISMAN. I am for anything that puts more TALISMAN out there in the world. Best roll and move ever made.

Talisman is wasted as a mere hobby game. Definitely one of my son's favorite games.

san il defanso wrote: I have often thought that there should be an Adventure Time version of Talisman. It works so well it's a little absurd.

Talisman is wasted as a mere hobby game. Definitely one of my son's favorite games.

I think the adventure Time version of munchkin is about the only time I'd play it. It's still munchkin, but the theme ties so well with it that it helps the gameplay a lot.

It's one of the few times I can think of where the theme helps a game design so well.

Now that the series is over, I wonder if companies still clamor to license it.
Read More...