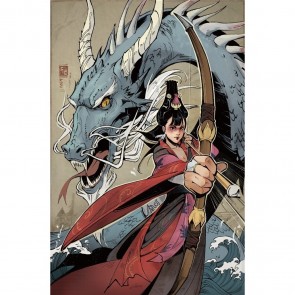 The Legendary Warriors and Monsters of Feudal Japan Bring Their Conflict to Comic Shops in November.

Rising Sun, the award-winning board game published by CMON Limited and designed by Eric M. Lang, will see its epic setting, feudal combat, and political intrigue adapted to comics in an all-new comic book series from IDW Publishing.

Co-written by industry legend Ron Marz and David Rodriguez (the creative team behind IDW’s Skylanders) and illustrated by Martín Cóccolo (Star Trek: Year Five), the three-issue miniseries will debut its first issue in November, and – as an added bonus – each issue of Rising Sun will feature exclusive content to enhance the game-playing experience for dedicated fans.

IDW’s Rising Sun storyline introduces Chiyoko of the Koi Clan, leader of a group of powerful warriors – the best each clan has to offer – on a mission to save Japan from dragons and monsters. But perhaps the greatest threat she faces is not the many monsters who are ravaging the country… but her very own team!

“When I first saw the game, I immediately knew it was a world I wanted to play in,” says Ron Marz. “As soon as I found out that Rising Sun was going to move into comics, I was the first one jumping up and down with my hand raised, yelling, ‘Pick me! Pick me!’”

“Rising Sun has a huge amount of world-building and deep backstory with the Clans, and it’s been great creating characters representing aspects of those clans and throwing them together,” says David Rodriguez. “I’ve had the pleasure of working with Ron, Martin, and game designer Eric M. Lang on other projects. They’re great talents, and IDW pulling them all together was a huge win for the book.”

“As an artist, it’s a real treat to be a part of a comic adaptation of this caliber,” says Martín Cóccolo. “The game is absolutely gorgeous and hopefully fans will find that I’ve treated the source material with respect. It’s a pleasure and a responsibility that I’m thrilled to take.”

“Considering that Rising Sun is a game about myths and legends, we are extremely honored to have such a legendary creative team working to bring a whole new dimension to the title,” says CMON’s Geoff Skinner. “We can’t wait for this story to add a whole new narrative dimension to the way people play the game.”