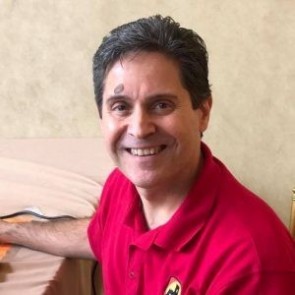 Hobby game entrepreneur, game media personality, and game industry veteran Stephen Buonocore will be stepping down from his role as President of Stronghold Games, effective on August 1, 2020.  Buonocore, 59, founded Stronghold Games in 2009 and served as its President for most of that time.

tronghold Games and Indie Boards & Cards merged in mid-2018 to form Indie Game Studios, where Buonocore continued in his role as President of Stronghold Games, as well as in the role of Spokesperson for the merged company.

Stephen Buonocore is also the cohost of Board Games Insider, one of the most popular hobby game podcasts, and he has appeared in interviews on television, radio, and numerous game media outlets to promote both the company and the game industry. Buonocore also serves on the Board of Directors for the Jack Vasel Memorial Fund, the purpose of which is to provide financial assistance to members of the gaming community who have suffered personal hardship.

“After over ten years with Stronghold Games and the merged company of Indie Game Studios, I have seen incredible growth and change in this fantastic industry”,said Stephen Buonocore. “Even through the adversity that has been this year, our small industry remains strong. Let us all focus, both from within the industry as well as through the grassroots of gamers, on the growth of an inclusive, diverse community. This must be the future of gaming for us all.”

“It is now time for me to hand the reins of the Stronghold Games brand to a new generation of amazing people within Indie Game Studios.  I look forward to playing the games that are made by these great people as they manage the brands of Stronghold Games and Indie Boards & Cards.”

“Please make no mistake, my retirement has been in the making for years, as I worked through a smooth transition with the CEO of Indie Game Studios, and my good friend, Travis Worthington.  Under his guidance, the company will continue to achieve great things in the future.”

“I leave to focus on family, friends, interests, and the enjoyment of life.  I will continue to produce the Board Games Insider podcast, where I share my knowledge, views, and love of the hobby game industry.  I plan to be involved in additional game media outlets as well in the future.”

“I cherish the wonderful relationships that I have forged through Stronghold Games, both with industry people and fans of the company.  Rest assured that you all will most definitely see me at many future game conventions and shows. I greatly look forward to that for years to come.”

While President of Stronghold Games, Stephen Buonocore provided vision and guidance for hundreds of game titles, both developed within the company and in partnership with publishers around the world.  Indie Game Studios CEO Travis Worthington will continue to direct the merged company.  Sydney Engelstein will become Director of Game Development for Stronghold Games.

Indie Games Studios was created from the 2018 merger of Stronghold Games and Indie Boards & Cards, two premiere hobby game companies.  The brand identities of both the original companies have been maintained. Indie Boards & Cards is best known for The Resistance, Avalon, Coup, the Aeon’s End universe, the Kodama series, and Flash Point Fire Rescue.  Stronghold Games is best known for Survive: Escape From Atlantis, the Space Cadets universe, Terraforming Mars, and for publishing games with strategic partners around the world.  Indie Games Studios is located in Oakland, California.

Sagrilarus replied the topic: #311589 01 Jul 2020 21:46
In simpler times I'd sit down with Stephen and pour each of us a glass of fine whiskey so we could toast his retirement in style. Not an option for us this time.

So I'll drink both.

Good luck in your retirement Stephen. Thanks for bringing us good gaming.