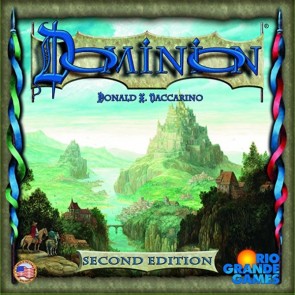 Board Games 3691
Dominion: A Biased Review
November 04, 2008
Rating
3.0
Dominion is an undeniably clever card game in which players use action ("kingdom") and money ("treasure") cards to buy additional action cards, additional money cards, and victory point cards. The basic idea is that newly purchased action/money/VP cards are eventually re-shuffled back into the deck; as a result, each player's deck steadily increases in size and becomes increasingly more powerful. When the game ends, the winner is the player who has the greatest sum total of VP cards in his/her deck.

My honest opinion of Dominion? I'm not too keen on the game - for the reasons described below.

There are stacks of action cards, money cards, and victory point cards available to all players. On their turn, players always have a hand of five cards to play. Initially, these cards consist of a combination of victory point cards (value = 1) and money cards (value = 1). There are additional 1-value money and 1-value VP cards that make up the player's initial draw deck.

On a player's turn, s/he does the following in order:

3. All played money cards, all remaining hand cards, and all purchased cards are added to the player's discard pile.

4. The player draws back up to five. If there are fewer than five cards in the player's draw deck, all discards (including the just-discarded cards) are reshuffled - forming the new draw deck.

In this manner, the player's play/draw deck gets bigger and bigger as newly purchased cards are discarded and then eventually shuffled back into the play deck. Part of Dominion's strategy therefore lies in the fact that players have complete control over distribution of cards in their play decks. A player's deck can be mostly money, mostly VP, mostly actions, an equal amount of each type, etc. (Note that drawn VP cards are completely useless until the end of the game, so buying tons of VP cards early in the game isn't necessarily a good idea.)

The game ends when the stack of highest-value VP cards is gone or three of the action card stacks are gone. As stated above, at game's end, whoever has the highest sum-total of VP in their deck wins.

My lack of interest in Dominion stems from my strong preference for high-interaction games. It isn't far from the truth to state that one might accurately simulate the level of interaction in Dominion by sitting in front of three or four carefully-angled mirrors and smiling and waving at the other "players". Given the tidal wave of love that has washed over Agricola, however - which is itself a low-interaction affair - my guess is that many gamers won't mind the lack of cross-player meddling in Dominion. I just happen to be one of the folks who do.

For those who are curious about the source of the game's low interactivity: Dominion's inward-facing focus is driven by the use of action cards, the vast majority of which have no effect on one's opponents. In my one play of Dominion, for example, the only card that provided any form of direct player interaction was the "Thief" action card, which is a card that allows players the opportunity to potentially steal money cards from opponents. (The Thief targets all opponents, not an individual player.) But even this limited type of interaction is tarnished by the fact that the Thief's effects represent the sort of chaotic randomness that one might find in Fluxx or Family Business. Although I crave player interactivity, I prefer my wranglings and skirmishes with fellow players to be strategic rather than arbitrary. Case in point: It's horribly frustrating for the player in last place (i.e., me) to be the only player to be hit by an opponent's Thief. (The Moat card provides immunity against the Thief, but you may not be lucky enough to draw one at the proper time.)

In truth, with only the smallest of modifications, one could easily play Dominion solitaire. If the Thief were assumed to be in play, for example, the solitaire player would simply make a once-per-turn die roll to check whether an "opponent" attempts to steal cards. One would also need to randomly deplete the action, money, and victory point card stacks each turn - to represent how these stacks would normally shrink in a multiple-player game - but that gameplay modification would also be fairly easy to implement. The general ease with which Dominion can be converted to complete solitaire play is, from my perspective, not a positive attribute.

Still, gamers who enjoy "parallel play" economic efficiency/engine games (Agricola, Race for the Galaxy) will find a lot to like in Dominion - the only caveat being that these same folks will need to have a preternaturally high tolerance for shuffling. There's MUCH too much re-shuffling in this game, which is due to the fact that (a) player decks are relatively small and (b) player turns are only 3-15 seconds apiece. So players are shuffling over and over again as their cards are drawn, discarded, drawn, discarded, etc.

Repetitive motion disorder from a game? Believe it.

Medical lawsuits aside, let's consider Dominion from the perspective of the noncompetitive social gamer. What's in the game for this type of player? Not much, is my guess. If your only intention in playing Dominion to hang out and chat with friends, it really isn't possible - since turns are so short that players don't have time to interact socially with one another. That is, unless you want to distract the other players and hold up the game, which usually isn't recommended - unless you think it's funny when an impatient player shakes a can of Red Bull and sprays it all over your meeple shirt.

To reiterate, Dominion certainly has its share of positive attributes. It's clever, and it plays very quickly - and I don't mean that in a snide way. Given the relatively brief time investment required, Dominion will likely be a popular filler for many, many folks.

However, my own opinion of Dominion is uncharitably low due to (1) the game's reliance on a criminally insane amount of card shuffling, (2) the extremely minor extent to which players can exert any direct influence whatsoever over other players' strategies/actions, and (3) the arbitrary, chaotic aspect of the few direct-interaction cards that exist in the game.

To be fair, related to the second point, my prediction is that future expansions - should they come to fruit - will likely enhance the degree of interaction present in Dominion. This might eventually result in my rating of the game climbing an extra half-point. Regardless, I can still imagine a situation where uber-friendly gaming groups might get in the habit of leaving the stacks of high-interaction cards untouched - in which case the amount of direct player interaction in the game would literally be reduced to zero.

So, all in all, Dominion is not the game for me.

W
wkover Top 100 Reviewer 3 reviews
Was this review helpful to you? 0 0