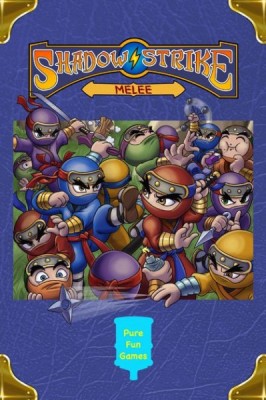 I googled Ninja Jokes and it told me none could be found. Well played, ninjas, well played.

Everyone at the table glances left and right, eyeing up their opponents. The lower halves of their faces are covered by a fan of cards, just like the masks that conceal the ninjas they are portraying. They search the eyes of their opponents, looking for “tells.” Something, anything to let them know what cards are being held. However, in a stealthy twist worthy of the Ninja namesake, they aren’t trying to determine what cards their adversaries are holding. Instead, they are looking for clues to what cards THEY hold. Because those fanned cards held in front of their mugs are facing outwards.

Shadow Strike: Melee has a fun factor that thrives on its simplicity. The combat cards are numbered 0 to 10. On your turn, you scan each of your opponents’ three combat cards and choose a victim…err…competitor to challenge to a duel. You both select a combat card to play and whoever has the lowest number takes a hit. The player taking the hit then turns one of their remaining combat cards facing in; to signify the damage they took(A slash mark is depicted on the reverse of the cards). Now they have the knowledge of that one card and it “only” took 1/3 of their health to find out. Players then replace the used combat cards from the draw pile, putting them in the direction they were originally facing when they were played. This creates a concoction of combat relying on luck, memory and judicious use of the Action cards.

Players start with three item cards. They will be a mixture of Smoke Bomb, Shuriken, and Energy Bar. The Shuriken allows you to choose the exact card from an opponent’s hand that they will have to play, virtually assuring you of a victory. That is, unless they play an Energy Bar, a card which allows them to replace their combat card with one from the top of the draw pile. Smoke Bombs do double duty: Allowing you to flush your entire hand of combat cards and draw new ones or permits you to jump into a duel you aren’t involved in and smite both of your opponents if you have the highest card. (No need for Samurai honor here, these are ninjas). Don’t worry about burning though the item cards, once you have played the last one in your hand (or discarded it in lieu of engaging in combat on your turn), you get to draw three more. Having unlimited access to action cards would seem like a questionable mechanism, but it keeps the fists flying with the appropriate degree of fury.

There is no irony that this game comes from pure fun games because that is what it is. There are not a lot of tactical decisions to be made, so any analysis paralysis moments are going to be for purely dramatic effect before you attack someone out of spite. Due to the luck of your opening hand, sometimes you’re going to be Bruce Lee; sometimes you’re going to be one of the guys standing in line to get beat down. This becomes especially prevalent as the player count rises, you’ll sometimes be lucky to get a turn in before pushing up daisies in a 5 player game. When playing anything above a 7 player count(the game supports up to 9 players), it is recommended you use the team play option that pairs you with another player. The rules are almost identical for Team Play (the only real change is the use of a smoke bomb doesn't harm your teammate if you jump into their duel), so besides the vested interest in your team winning, it just means you have one less person attacking you.

I like getting this to the table and it gets on the table in a heartbeat with an almost non-existent set-up time. It’s cute, it’s chaos and it’s all over in about 10 minutes.

It is hilarious in those type of situations. Especially watching the bravado of players when they absolutely have no idea what crap cards they are holding.
Read More...