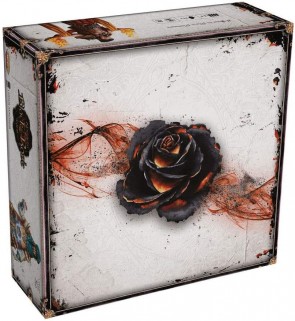 Wiz-War for the Kickstarter Generation.

I was drawn to Marco Montanaro’s Black Rose Wars, recently released to retail by Ares, because it looked like an interestingly baroque take on the classic duelin’ wizards chestnut. You know the game – wizards throw a bunch of spells at each other a la Wiz-War or Magic: the Gathering. In this particular instance, the setting is the mysterious and arcane Black Rose Lodge and the spellslingers are vying to become the Grand Master of the Black Rose Order by leveraging six different schools of magic, various room effects, traps, and evoked minions. There are also quests for each Mage to pursue with attendant rewards and there’s a chance that nobody beats “the House” if the Black Rose Lodge itself wins the game so it’s not all just lightning bolt, lightning bolt, lightning bolt.

In unvarnished terms, Black Rose Wars is a skirmish game operating on a deckbuilding and programmed action chassis, with filigree such as game state-altering events, dual effect spell cards, elemental designations for the spells, and a variety of potential activation options. Winning is a matter of Power, which you gain from completing the conditions of Quest cards, KOing other Mages (or, more specifically, contributing the most damage to KOing other mages), and for destabilizing and destroying rooms. With six types of magic involved and a full codex worth of spell descriptions, there is quite a lot of “crunch” here that may be especially appealing to those looking for something more complex than the usual fighting game.

Structurally, a turn starts with a Black Rose phase, which is when the events happen. These are also metered by the current Moon Phase, which is a sort of timer. The Mages then Study, drawing cards from their Grimoire (deck) and then an assortment of four cards from any school they wish, discarding two of those. Then, Spells are locked into position on a player’s Mage sheet with a sequenced series of three slots and a “Quick Spell” position that can be played at any time. From there it’s into the Action Phase, which is pretty much the standard move-and-shoot heart of the game. There’s quite a bit of work surrounding the core gameplay loops. 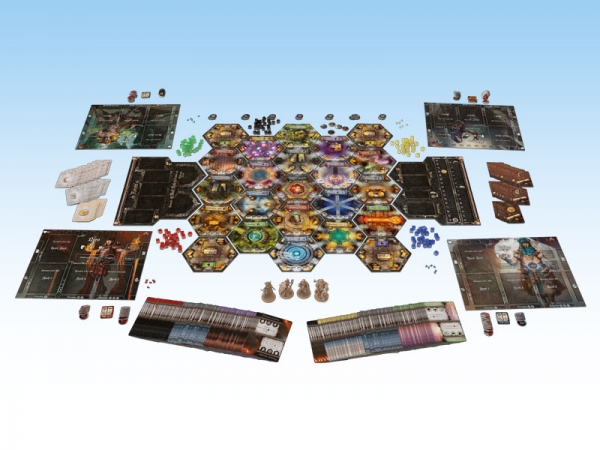 It's a very ornate game, which sets it apart from many other designs in this class. I appreciate the attempt at atmospheric world-building, and I value that the game is striving for something beyond the usual wizardly ro-cham-bo. However, I’m not sure that I find this game fun at all. The problem is that it’s coming into a field that is virtually packed with great 2-4 player skirmish games. For example, I’m not sure I would ever choose to play this over Wildlands or, in fact, the much more capricious but simpler Wiz-War. The question that Black Rose Wars faces is the same one that faces a lot of today’s more complicated designs – does the complexity and the commitment it requires actually net you a better or more robust game?

In this game’s case, I think the answer is “no”. Playing it, I felt like I was doing a lot of the same kinds of things I do in other games, but spending more time to do so and with the game demanding more from me as a player. There is definitely a lot of depth here in planning out a turn as well as selecting complimentary spells and working out counter-strategies in the deckbuilding. This is the kind of game that seems like it might be really good or even great if played with another player or two that really, really know the game backwards and forwards. Assuming that you do as well. Understanding the nuances of the Preparation phase, the combinatorial effects of the cards, and how all the elements work together will likely lead to a more positive experience while also drastically reducing the playtime. Take note that this can be a painfully long game, with players looking over cards in the Study and Preparation phase and trying to work out strategies and plan both the current turn as well as deck composition. This means sessions can feel like the bulk of the time is spent in heads-down processing rather than in on-board action.

A chief concern, given the above, is if this game is going to see the kind of long-term, high-level committed play it really demands. I’m not sure that it will. Card knowledge is critical, and I can count on ten hands the number of games like this that are essentially aspiring to be “lifestyle” games that have disappeared into obscure irrelevance.  Mage Wars, from a few years back, springs immediately to mind. This kind of game lives and dies based on how much it is played and absorbed, it is most definitely not something to play once or twice and you’ve seen and done it all.

But I’m coming away from the game not thinking about getting it back to the table so I can get to that ascended state, but rather about other games that I’d rather play in its stead. This isn’t a good sign. There’s no doubt that Black Rose Wars is flavorful and the notion of Mages skulking around dungeons, compiling Grimoires, and blasting the shit of each other is a perennial favorite. But what I keep coming back to with this game is that it’s wanting to do things that other games simply do better and more efficiently.

With that said, the other games also don’t do those things as deeply. So maybe the audience here, which I am not a part of, is folks that want a heftier alternative to a genre that is usually very beer-and-pretzels oriented. For such players there is something of interest here and it is a quite elaborate and handsomely produced title so that is also to its credit. But for many modern players, myself included, its potential differentiators are likely to be liabilities.

Gary Sax replied the topic: #316610 26 Nov 2020 12:09
Excellent review today. Sounds a lot like the Oath review, except that I do think Oath is doing some things that other games in its genre don't do which potentially justifies the complexity if you're committed!

Will one of these ever come along and actually be better than Wiz-War? I doubt it.

Gary Sax replied the topic: #316617 26 Nov 2020 14:45
I mean, there was the one that gave you huge spellbooks of cards if you wanted a super complicated version of mages fighting but the name escapes me. It's a crowded space.

hotseatgames replied the topic: #316618 26 Nov 2020 14:52
I think you are talking about Mage Wars ( I never played it), but there was also Codex. Codex is more deckbuilder Magic the Gathering... I think to compete with Wiz-War you need a board and figures.

southernman replied the topic: #316619 26 Nov 2020 14:53
I think your last paragraph was the most accurate, this went down well from the European LMS as did their recent KS Nova Aeta; Renaissance (I nearly backed but already had their Sine Tempore which is the same game in space). These new European companies, including Awaken Realms and a few others, are doing something different and big in scale and content and have a dedicated and large following. Perhaps it's a Europe v US taste difference or maybe simply just not your taste (as you mentioned).

NOTE: Regarding another post; I totally clicked on this review because Michael wrote it. I've been reading Michael's reviews for fifteen years. I didn't even know Black Rose Wars existed.
Read More...