...to tread the jeweled thrones of the Earth under his sandaled feet - A look at Dark Horse's Conan 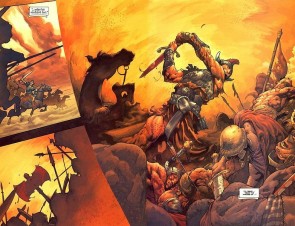 My history with Conan the Barbarian is a bit of a personal one.  In addition to instilling morals, saying, "Please," and "Thank you," and all the other values a parent tries to teach their children, another important lesson that my father taught me was what is and isn't the way Conan the Barbarian should be.  Back when I was a youngin', there was a cartoon on called "Conan the Adventurer", not to be confused with the live-action show of the same name.  One Sunday morning while my father was flipping through channels, we came upon the opening titles of the cartoon.

"This is isn't Conan," my father stated.

I'd never watched the show, nor did I have any idea who Conan was (the Arnnie movie came out the same year I was born).  So my father promised that the next time we went to my grandmother's house, he'd give me his old Conan books.  And thus, I learned how Conan was meant to be.  Those old stories were quite the shock to my 10 year old system (the ideal age for any boy to discover Conan), but I ate them up.  I couldn't put my finger on it then, but there was something so visceral, so primal about Conan that was just impossible not to admire.

Flash forward to 2008.  I was at a comic show in Plainville, CT.  A couple of guys desperate to fund their trip to Comic-Con NY had a box on their table, written on it:

I walked away with it for $60, worth every last cent.  Dark Horse's Conan run is bar none the closest anyone has ever come to capturing the spirit of Robert E. Howard's Cimmerian adventurer.

Dark Horse's Conan retells several of Howard's original tales, yet it attempts to fill the spaces between them with new material.  The adaptations of stories like "The Frost Giant's Daughter," "The God in the Bowl," and "The Tower of the Elephant" are outstanding.  I've seen several visual interpretations of these stories over the years, arguably most of them, and these adaptations are spot on.  Yet the new stories that fill the spaces between Conan's adventures that we know and love may be the series greatest accomplishment.  Never before has anyone been able to construct new Conan stories and have them fit so seamlessly into those established by Howard himself. The Dark Horse series abandoned all but Howard's original work, incorporating nothing by L. Sprague de Camp, Robert Jordan, the Marvel comics series, or any other authors who helped further add to the common misunderstanding of the character.  Over the years, the primal nature of the character was mistaken for ultra-violence and juvenile sexuality.  The Schwarzenegger film served to cement this image in the general public's mind.  Along comes Kurt Busiek (Marvels, Astro City) and Cary Nord (Secret Invasion:  X-Men) to set the record straight.

Busiek served as writer for a majority of the book's 50 issue run.  Along with artist Cary Nord, Busiek follows the chronology of Conan's adventures established by Dale Rippke (he even went on to address a problem in this continuity in issue #18, "The Helm").  Between writing incredibly accurate adaptations of Howard's Conan tales, Busiek takes time to tell the stories of what Conan did between those adventures.  Since Busiek was working exclusively from Howard's groundwork, these stories feel completely in tone with the adaptations, rising to the level of being much more than just "fillers."  One particular story that stands out is one in which Conan is captured and enslaved by Hyperboreans.  Conan had grown up on his grandfather's tales of Hyperborea, a peaceful land of beauties unheard of.  Truth of it is, Hyperborea belongs to an immortal race of sorcerers that, when bored with life, throw themselves and their numerous slaves into what is thought to be a bottomless cliff.  Busiek's storytelling here makes you forget you're reading something that Howard didn't originally envision.  Nobody writes fantasy like Howard any more, and nobody could ever duplicate Howard's taste for frenetic combat, but Busiek gets it.

Another great story that Busiek told was that of Conan's childhood.  Forget that crap about his family being killed and Conan being enslaved.  Busiek took his time with this story, spreading it out throughout the  book's run (he started it with #8, not finishing it until #46).  These issues detail Conan's upbringing in Cimmeria, his birth (literally on a battlefield), his first fight, and his earliest conquests (and I don't just mean militaristic, if you catch my drift).  Greg Ruth served as artist for these issues, and his style serves them well.  Cimmeria is described by Howard as a bleak, rugged, and dark; Ruth's art is just that.

Speaking of art, Cary Nord's art for the series is utterly fantastic.  Seriously, this man deserves to amongst the ranks of the absolute giants in the art field that have tackled Conan.  Nord's Conan takes cues from the standard set by Frazetta, but his action scenes are packed with a savage energy that is unparalleled in previous Conan comics.  The most interesting choice made with Nord's art is that it isn't inked.  It has a natural, colored pencil look to it that's quite refreshing.  It takes it a step away from the traditional look of comics, and a step closer to the world of fantasy art you usually see elsewhere.

The series isn't perfect from start to finish.  The quality wavers a bit towards the end, but none of it reaches the embarrassing level that Conan has seen in the past in any other medium, be it film, comic, or television.  Mike Mignola has a 3 issue arc that's quite good, and even a number of the one-shots and mini-series are exceptionally well done.  The series has been relaunched as Conan the Cimmerian, and so far it's much better than the original Conan book was when it ended, and some of it has been pretty close to being of Busiek/Nord caliber.

The entire run is available in trade paperback, and there's even collections of the best one-shots and mini-series, as well as the "Born on the Battlefield" story of Conan's youth.  If you consider yourself a Conan fan whatsoever, I can't recommend these books  enough.  Even if you're a comic reader and want something outside the superhero genre, there's something here you're bound to really enjoy.  Unfortunately, Howard's writing may not be for everyone these days.  These comics remain faithful to his vision as well as being accessible.

Discuss this article
Log in to comment
Posts in discussion: ...to tread the jeweled thrones of the Earth under his sandaled feet - A look at Dark Horse's Conan