Back To the Future, DC Comics Style 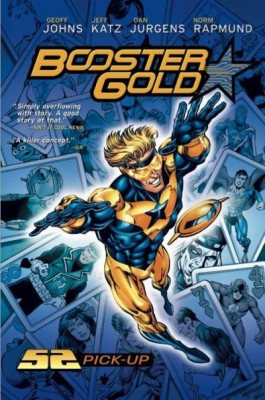 Back when the hardcover edition first came out, my local comic shop ran a "Satisfaction Guaranteed or Your Money Back" special on Booster Gold:  52 Pick-Up. It certainly caught my attention, but I had a few questions first:

Do I need to have any previous knowledge about Booster Gold?

Do I need to have read 52 to fully understand what's going on?

Are you serious about the money back guarantee?

The answers to the questions were, "No," "No," and "Well, it's more that we give you store credit, but yes, we're serious," respectively.

It was enough to sell me a copy, so I hunkered down the cash, took it home, and that's as far as I got with it.  I think it came out roughly the same time that the Sinestro Corps saga was going on, and that story took up most of my comic reading time at the moment.  Time went on and 52 Pick-Up got buried beneath the veritable mountain of other comics and graphic novels that I read.  That is, until last week, when I found the book, appropriately enough, on the bottom of a stack of graphic novels I've had accumulating for some time.  If I didn't like it, I knew I'd be stuck with it at this point, but I figured it was time to see what the fuss was all about.

So who the hell is Booster Gold?  Booster is a superhero from the 25th century.  He's a former football player who, after getting caught throwing games that he bet on, gets interested in 20th century superheroes.  So he steals a few superhero artifacts from museum displays, uses a time machine to get to the 20th century, and takes up the hero gig himself.  Yet he's essentially doing it for self-promotion and wealth, as he misses the attention he used to get as a football player.  This is clear to the other DC heroes and they think of him as a total jackass.

In 52, Booster pretty much single handedly saves the entire multiverse, consisting of 52 identical worlds.  Thing is, nobody knows that this multiverse exists, and it's better that way, so Booster Gold, attention-whore extraordinaire, can't tell anybody that he did it.  This is where 52 Pick-Up starts (and fear not, Booster newbies, everything you need to know about his past is in 52 Pick-Up).

Having saved 52 different versions of planet Earth, Booster Gold is back in the modern DC universe.  He's desperately trying to be accepted into the Justice League.  After a week of monitoring him, the League reluctantly accepts his request. When Booster accepts his JLA membership plaque (because, you know, superheroes do things like give each other plaques), it changes into a death certificate for Hal Jordan, the greatest Green Lantern.  It's like when Marty McFly realizes that he and his siblings are disappearing from the photograph; somebody is altering history to kill the Justice League.  With the help of his Time Master friend, Rip Hunter, and robot sidekick, Skeets, it's up to Booster to put the DC comics timeline back in order.  Not only is he going to fix history, he's going to try to prevent his best friend, Ted Kord, aka the Blue Beetle, from dying at the hands of Maxwell Lord.

52 Pick-Up explores some interesting territory.  What if Sinestro came to Earth to speak with Guy Gardner days before Hal Jordan is selected to become a Green Lantern?  What if Johnathan Kent's grandfather never moved to Smallville, thus allowing Lionel Luthor to discover the crashed spacecraft bearing Kal-El?  And then there's what I feel is the strongest chapter in the book, when Booster travels to the events of The Killing Joke in an attempt to prevent Barbara Gordon from being shot by the Joker.  This part of the book is fantastic, heartbreaking, and one of the coolest moments I've seen in mainstream comics in the last few years.  This sort of Back to the Future style story is a killer concept for a superhero book, and when you have a writer like Geoff Johns who really knows the universe he's setting it in, you've got a home run on your hands.

The final chapter of 52 Pick-Up was slightly lost on me, as it deals heavily with the different versions of the Blue Beetle, a character I'm not overly familiar with.  That's not to say that it was unreadable, but rather that I'd probably have gotten more out of it if I knew more about the character.  In fact, 52 Pick-Up remains incredibly accessible from start to finish, which is in itself quite a feat.  Booster Gold is not exactly a well-known character with a history known by all comic readers, nor is the 52 worlds of the DC multiverse exactly the most easy thing for a newcomer to wrap their head around.  Yet Geoff Johns manages to give the reader enough information to know what's going on without bogging down the story in details and even manages to create a little mystery to boot.  It's largely a fun, lighthearted romp through the DC universe timeline, it's serious when it needs to be, and it provides a nice spotlight for not just one B-list character.  I'm not going to recommend it to everyone, but if you're into DC Comics, 52 Pick-Up is one hell of a good ride.

Discuss this article
Log in to comment
Posts in discussion: Back To the Future, DC Comics Style