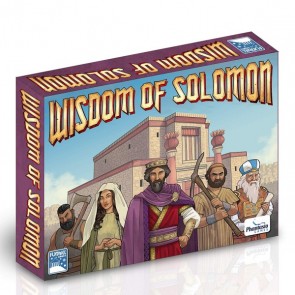 King Solomon reigned over the kingdom of Israel during its golden age. He commanded tribute from Israel’s neighbors, expanded Israel’s borders, built roads and fortresses, and kept the peace within the land. His merchants filled the kingdom with exotic goods such as spices, ivory, apes, and peacocks. Perhaps most famously, Solomon also built the Temple in Jerusalem, a golden place of worship lasting hundreds of years.

Wisdom of Solomon is a 1-5 player worker placement game taking place during the reign of King Solomon. Players act as governors for Solomon, sending out workers to gather resources, build structures, and expand Solomon’s influence in the kingdom. The player who curries the most Favor will be crowned the winner!

Zombies!!!
4.0
S Sagrilarus
"Doesn't take itself too seriously, rules are quick and easy..."