FFG/Asmodee brings back the Legend of the Five Rings 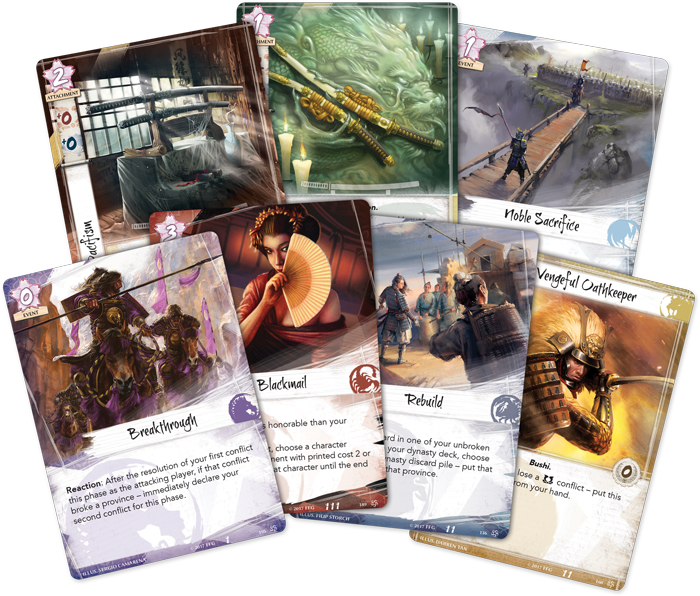 The cards are very pretty, and suggest that the game has changed significantly. I don't see a focus value for dueling purposes, and it looks like honor has been simplified or eliminated. Some streamlining is probably healthy for the game, but this will make all of the old cards unplayable in the new format. There is also a new mechanic involving fate, such that cards brought into play receive fate tokens that dwindle each turn. When a card no longer has a fate token, it is discarded.

I always enjoyed the Rokugan setting of Legend of the Five Rings, and even ran an rpg campaign in it that lasted 3.5 years. In fact, the campaign got so popular that we had to split into two campaigns, with five players and one GM in each group. However, I was less enthusiastic about the card game. With a minimum dynasty deck size of 30 and a limit of three copies per card, L5R strongly rewarded ruthless deck design over tactical play. But those are some damn pretty cards, so I'm tempted to give it a try. For 20 years, L5R always had enough local players to support tournaments, so I could probably count on regular play, especially now at the FFG Event Center.
Last edit: 21 Apr 2017 10:35 by Shellhead.

Less More
21 Apr 2017 22:06 #246925 by Colorcrayons
Replied by Colorcrayons on topic FFG/Asmodee brings back the Legend of the Five Rings
I dunno what it is about it, but I just can't muster excitement for it.

I absolutely appreciate feudal era Japan, and respect L5R in all its incarnations, even as a mass combat minis game in the late 90's. The ccg had some very solid game play with ridiculous huge prizes that put MtG to shame during its zenith.

Maybe I'm just burnout on the idea of LCGs. FFG have kind of placed the,selves in a way that has spread themselves out too thinly. Even though 3 of their titles in their LCGs catalogue are officially dead now, they still have just too much.

But I do know there are enough hardcore tastemakers in the twin cities that can bring interest back into l5r again here. I wish I was one of those who could be swayed back into it.
The following user(s) said Thank You: Gary Sax

Less More
23 Apr 2017 00:23 #246981 by metalface13
Replied by metalface13 on topic FFG/Asmodee brings back the Legend of the Five Rings
Wow, was it that long ago that FFG announced they bought the rights? Could be interesting, does it have multiplayer play? I don't remember if the original did or not. There seems to be a pretty healthy AGoT group of players in the Pittsburgh area, I wonder if this would catch on?

Less More
23 Apr 2017 10:44 #246988 by Shellhead
Replied by Shellhead on topic FFG/Asmodee brings back the Legend of the Five Rings
L5R was designed from the start to be multi-player, but it didn't work as well in that format. Several years ago, there was another attempt at making L5R work as a multi-player game, with War of Honor. Barnes reviewed it here and said it was good, but the underlying L5R mechanics made the game long.

The comparison with A Game of Thrones is interesting, because that book series and L5R both showed up in 1996, and there are definite comparisons to be made. Seven clans. A vast wall to protect the kingdom from monsters. A clan that lives near that wall, and another clan that lives in the mountains. Corruption, magic, intrigue, civil war, etc.
The following user(s) said Thank You: metalface13

Less More
23 Apr 2017 11:02 #246989 by Gary Sax
Replied by Gary Sax on topic FFG/Asmodee brings back the Legend of the Five Rings
Tough sell on this one. Regardless of how good the gameplay is, I just don't see how this succeeds. Market is so tough!