Carthage Review - Head to Head with Raf and Wade 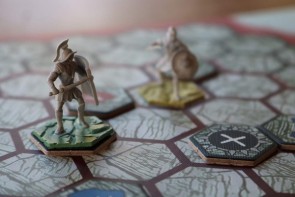 Raf: I don't follow the Kickstarter scene very closely, so I missed the initial Carthage campaign. Having played it, I'm surprised it wasn't blowing up the various communities I frequent. A tactical arena combat game that uses deck building to drive actions? I was interested immediately upon reading about it. I'm tired of deck building games using the same tired system to iteratively improve your deck in a tired quest for marginally more points. Using that system to fuel your blood thirsty gladiator is awesome. Is it fair to say you agree?

Wade: Absolutely. I know it is early in its life cycle but I can really see this title as a go-to filler: 1 to 5 players, super quick, and engaging- somewhat on the level of King of Tokyo. Like that game, Carthage excels in accessibility. You can practically teach the base game in the amount of time it takes to explain what a deck builder is. It is super streamlined: Crowd Favor acts as currency, Theater cards are round modifiers and Armor acts as Health. I thought regaining armor mid battle was a tad odd but thematically, you can see a gladiator picking up a shield or strapping on a helm to keep himself alive in the Arena. It's a little more likely than eating a chicken leg to regain health.

R: I'm right there with you. There's a high level of polish and ease to Carthage - in fact, higher than most traditionally published games, let alone Kickstarter. Like most deck builders there's a relative ease to getting going. The most complex part of setting up is deciding how many crocodiles you want wandering your arena and whether or not to use spiked pillars or regular (spiked, duh). The rule book includes a few scenarios in the back but there's nothing stopping you from creating your own. Carthage is a game of blood and tactical chaos; have some fun with it. Expansion modules may add tweaks here or there but designer Luke Seinen smartly ensured that you don't really have to learn any new rules for them.

W: The base Carthage game is like this really great chili. It is fantastic on its own. However, it knows that some people will want to pump things up, so it gives you a virtual spice rack of Modules and Mini-expansions to sprinkle in. A dash of customized player equipment cards, a sprinkle of literally "blocking" a card purchase that requires an opponent to pay you a premium if they want a specific card. If a module doesn't fit your palate, drop it from your next game. Honestly, they all fit together incredibly well. No matter what you add or subtract, it is still a damn fine chili.

R: The only one that isn't optional is the Beast Variant. No module that allows you to take the role of a rampaging rhino hell-bent on revenge or a glorious kingmaking Peacock should ever be left out.

W: Exactly! Player elimination always has a sting but with this module, eradicated players step back into the arena as a random beast bent on feasting on the remaining players. One of my favorites of these is the crazed fan, a spectator who has had just enough ale to think leaping onto the pitch was a wise thing to do.

R: I love that all these little effects feel so natural. If you've seen it in a gladiator movie, it's in the game with little rules overheard. Even the classic arena match of a huddled mass of fighters against an armored hero in a chariot is present if you want to go co-op or solo. Kicking people into pillars, dodging wild animals, and even saluting the crowd for glory are all here in a relatively svelte ruleset. There are only 4 basic symbols, and it's the combinations that evoke cinematic moments. Attacks that hit from range and prevent movement hardly need the title of 'Chained Bolas' to conjure that image. The same goes for things like backflips and the effects you mentioned like donning armor.

W: I love the execution of the Javelin. When you hit an opponent with it, they receive the card and add it to their hand and can use it on you in later rounds. Now THAT is a cinematic moment: pulling a weapon from your body and using it against your attacker.

R: Things aren't completely perfect, but this is simply a fun game. Like in any deck-builder, powerful cards cost a lot of money. If your deck shuffles out all your glory in an early turn you've got a quick advantage over players who receive more even distributions. This isn't a huge problem at low player counts, but at high player counts the overall power in the game can rise rapidly even if the per player average is similar. When 1 or 2 opponents have 4-5 damage cards it isn't a big deal; when 3 or 4 have them it can spell doom for the poor soul on the receiving end. Thank Caesar for the Beast expansion.

W: Rabbiting is a concern as well but there are a couple of Theater cards that alleviate it. More importantly, one of the actions you can take is called "lobby" and it allows you to go through the previously used Theater cards and put one of the top of the pile (Facedown or Face up, players choice), to take effect at the beginning of the next turn. If someone is running away the entire time, you use this to balance the playing field...or shrink it into a close quarters battle. I'm not sure if this is an actual complaint but this has to be a contender for the world's largest instruction manual. Not thickness, mind you, but in square footage. I felt like I should be picking out appetizers and nice wine from the menu to go along with the mayhem. Does red or white wine go with blood on the sand?

R: My biggest complaint is that I'm not a fan of this box size or shape. But honestly if that's my chief complaint we've got a solid game on our hands. This isn't quite as great as Shadespire, the main tactical-arena game I'm playing these days, but Carthage plays faster and handles varying player counts much better. I'm going to come back to this over and over.

W: You mention other arena fighting games; I think Carthage is a perfect starting point if you are not sure if you would enjoy an arena skirmish. No Dice, no missed attacks, every onslaught finds flesh if you are in range. Heck, it is even a great starting point if you aren't sure you would like a deck building game. It's Live Fast, Die Fast, leave a stylized, graphic-novel corpse. It's total Carthage...err...Carnage in an oddly shaped box.

Editor's Note - Carthage is currently only available on Amazon.

ecargo wrote: Great H2H. Skirmish games aren't usually my thing, but I want to try this one.

You absolutely should. It really transcends being an arena fighter while doing a multitude of things to make it feel perfectly "Gladiator."

cdennett replied the topic: #278361 25 Jul 2018 13:13
Sad, it sounds interesting, but I despise any deck builder that requires shuffling your deck more than once a game (which means I despise most deck builders). But, this had completely passed under my radar, probably because "Carthage" sounds like some blocks-on-a-map wargame...

cdennett wrote: Sad, it sounds interesting, but I despise any deck builder that requires shuffling your deck more than once a game (which means I despise most deck builders). But, this had completely passed under my radar, probably because "Carthage" sounds like some blocks-on-a-map wargame...

Everyone starts with the same basic 10 card deck, every new card purchase goes into your discard pile. So, yes, you will be shuffling roughly every two rounds (depending how many cards you purchase or how many cards you "focus" which is the ability to remove weaker cards from your deck). It does a good job of adding tension when someone buys a powerful card and you are wondering if they have access to it this round or not.
Read More...